A new maintenance session has been announced by Blizzard Entertainment, both online and on the Battle.net app. With HGC Finals on the horizon its not a big surprise that there is some maintenance being done.

Although the frequency of these events is starting to build some excitement among the global following. We know what is on the horizon with Blizzcon so near. Try to remain calm as you lose your precious HotS for a few hours. Here’s what you need to know about Heroes of the Storm’s upcoming maintenance.

This Is The Third Major Patching Event Recently

A hotfix here and a weekly maintenance session here. All what we have come to expect, in a well maintained video game, but then a few new characters. A new patch follows and another character is on the horizon.

Things are ramping up and the new firepower must certainly be in preparation for this months Blizzcon. It is the premier event and the HGC Finals are boasting over a million dollars in cash and prizes. That’s enough to turn some heads and put some peeps in the seats.

How Could We Not Hope It’s The Big One?!

The big one!? The patch with Junkrat explosively entering the Nexus!
Don’t be afraid to call out sick from work tomorrow. 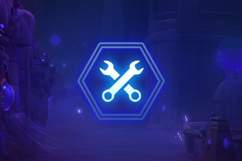 Heroes of the Storm: What is the Heroes Global Championship?