Epic Games Can you outrun a car?

For those of you out there who were looking forward to driving around in the world of Fortnite with your friends, it appears that you’ll have to keep on waiting as these vehicles don’t appear ready for the road just yet.

Various leakers previously said that cars would release in Fortnite on July 21, but that day has come and gone and they were never added. More information about how they would operate in Fortnite leaked, indicating that Epic still has plans to release them.

They were featured prominently in the Season 3 trailer, and Epic has already confirmed they’d be arriving at some point during this season.

However, it seems like they could still be a while out, at least according to Epic themselves.

Where Are The Cars?

Fender bender? #NoSweat.
Run out of gas? That's not covered.

Our lawyers are currently sweating the policy details and fixing typos like 'otter coverage' instead of auto coverage. Due to this, many vehicles got taken for inspection.

Throughout the season, Epic has been posting on Reddit and Twitter about the No Sweat insurance, and with their latest update, they seemingly confirmed cars will not be arriving for at least a few more weeks.

“Expect a few weeks until we’re road ready,” says the tweet. We’re not sure if we’re supposed to take that time literally, but if we are then it won’t be until at least August until we’re able to get behind the wheel of a car.

That’s definitely disappointing news as cars were a big selling point of the new season and now that the water level is dropping quite rapidly, now would be a great time to hit the open road.

The timing is quite strange and it actually leads into something that people might not be ready to talk about just yet.

Will Season 3 Be Extended? 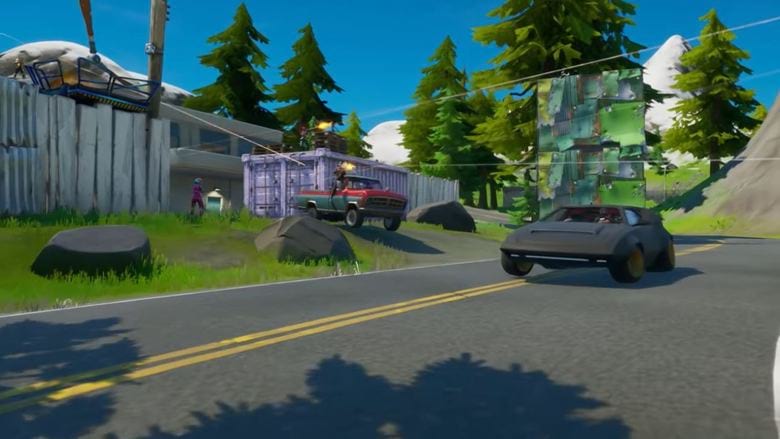 Epic GamesWhen are the cars coming?

The fact that cars will now seemingly be arriving so late into the season, that begs the question of whether or not Season 3 will be extended.

It does seem a bit strange to add something that was seen in a trailer just a few weeks before the start of a new season, but that’s what it appears Epic will do if they actually go through with this.

Remember, Season 3 will wrap up near the end of August, but it looks like Epic is already prepared for the possibility of an extension.

Back on June 18, FireMonkey reported that Epic had an extra week of challenges ready to go in September, meaning they were more than ready in the event of a delay.

Whether this ends up happening remains to be seen, but considering they’ve extended each season in Chapter 2 so far, it wouldn’t be surprising.

Read More
Fortnite, Gaming News
It looks like the cars won't be coming to Fortnite for a while.