While Fortnite Season 5 might’ve been known for its massive number of crossovers, Season 6 has kept the ball rolling, but at a much slower pace.

In the Battle Pass alone, we have Lara Croft and Raven from the Teen Titans, and we’ll be getting Neymar Jr. at a later date.

Nothing has come to the Item Shop at this point, but it looks like that’ll be changing in the very near future when Aloy from Horizon Zero Dawn comes to the game.

For those of you out of the loop, Horizon Zero Dawn released for the PS4 back in 2017, before Fortnite Battle Royale even came out.

It has since been ported to PC and there is a sequel on the horizon, no pun intended. Aloy is the main character of the game and she’ll be joining Kratos as the next PlayStation icon. It can even be argued that this is the coolest looking crossover skin yet.

Aloy will be in the Item Shop on April 15 for all Fortnite players, not just the PlayStation owners.

Like Kratos before her, PS5 owners will be able to get an exclusive style, and for Aloy it’ll be the Ice Hunter Aloy outfit, which is based on the Banuk Ice Hunter outfit from Horizon Zero Dawn.

If you’re lucky enough, you can compete in the PlayStation-exclusive Aloy Cup on April 14 for the chance to win this bundle for free. This cup has a special twist where bow eliminations will be worth more points, so try to use that when you can.

Make sure you check your in-game compete for the start time for the tournament in your area.

What’s in the Set? 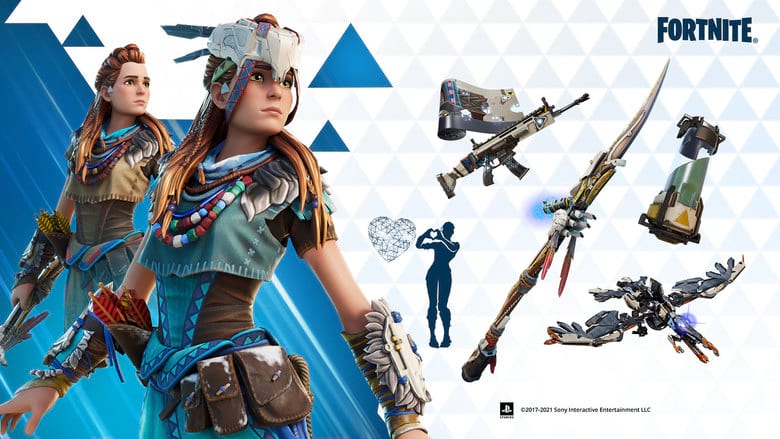 You can tell that Epic and Sony put a lot of work into getting all of this just right as her skin and looks like it was ripped directly from Horizon Zero Dawn itself.

Here’s everything that will be part of the upcoming bundle:

All in all, it’s a pretty good bundle and if you’re a fan of the franchise she’s from, you’ll definitely want to pick it up.

To celebrate this occasion, Aloy and Lara Croft will be teaming up in an LTM that puts the two characters on a team together. Players will automatically be assigned either Aloy or Lara in the Duos mode, and you’ll have to fight for the victory royale.

The catch is that Aloy can only use the bow while Lara is stuck using only dual pistols, so it tries to remain as faithful to the characters as possible. On paper, it sounds like a very cool idea, but we’ll just have to hope it translates well over to Fortnite.

This LTM will be live from April 16 to April 18, so make sure you get in there and give it a try before it’s gone.