The latest week of Fortnite challenges are now live, but you don’t have to worry about getting them all done at once.

With the exception of the Legendary Quests, you have the duration of the entire season to finish your quests. However, many of the quests in Season 5 are part of an arc of sorts as you’ll have to do certain things in order.

This means if you’re behind on your quests, you might not be seeing the new ones pop up each week. Not to worry though, they will still be waiting for you once you get to that point.

One of the Week 9 quests asks players to emote in front of stone statues, which is actually a pretty easy thing to do, especially if you know exactly where to go.

Where to Emote at Stone Statues 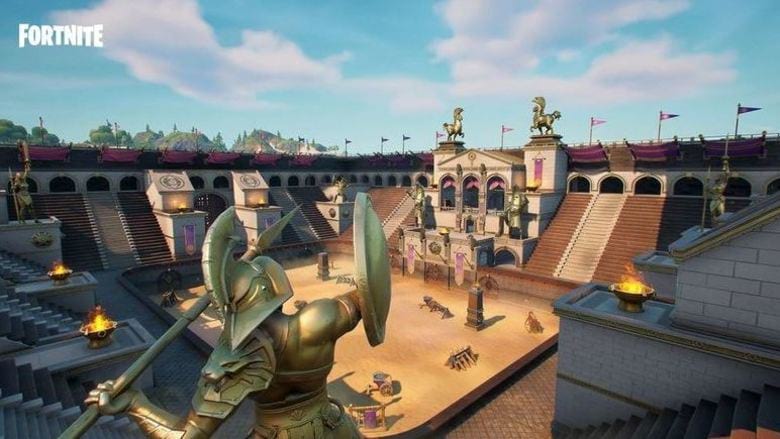 Instead of having to look for giant Stonehenge-type statues, you’ll instead just have to land at Colossal Coliseum to get this quest done.

At either of the entrances to the POI itself, you’ll find giant statues and this will be what you need to emote in front of.

Whether you use the new Gangnam Style emote or something else, it doesn’t matter as all you’ll have to do is use a simple emote to get this challenge done.

In what’s our best sign of an update coming next week, the Week 10 quests have not yet leaked, which is also a good way of knowing when new content is coming.

There are a few things that are scheduled for fixes and changes in the next update currently, with perhaps the biggest change of all being the nerf to the superhero skins.

It’s shaping up to an exciting update, but we don’t know everything that Epic has up their sleeves. There’s even a chance that golf carts could be returning, so keep an eye out for that as well.

The update isn’t yet confirmed, but all signs are definitely pointing towards next week, which is also when we’ll be seeing another set of quests.

READ NEXT: What’s Going on With the Female Midas Skin in Fortnite?

Loading more stories
Here's where to emote at stone statues in Fortnite.