Dwayne Johnson’s net worth is $220 million, according to Go Banking Rates. The self-declared “most electrifying man in show business,” The Rock has become one of the highest paid actors in the world.

After beginning his career as a professional wrestler, Johnson successfully transitioned into film. He has earnings from a range of different endeavors, including as an actor, wrestler, producer, author, real estate manager, and through endorsements. Johnson was listed as one of Time’s 100 Most Influential People in the World in 2016.

His huge crossover appeal and 180-million strong social media following make the former wrestler a box office and advertisement heavyweight – and he is only getting bigger. Renowned for his work-ethic (he sleeps just four to five hours a night), Johnson is also celebrated for his positive attitude, charity work, and diverse background. He has numerous movies in production, along with his own production company and hosts several television shows.

1. He’s One of the Highest-Paid Actors In the World, and Also Has a Guinness World Record 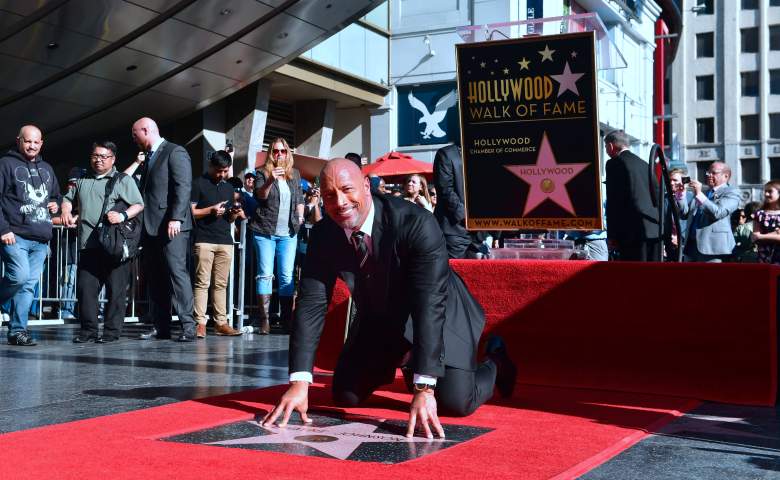 Actor Dwayne Johnson poses on his Hollywood Walk of Fame Star is unveiled in Hollywood, California on December 13, 2017. / Getty

Johnson earned the title of the world’s highest-paid actor in 2016, earning over $64.5 million. Though he relinquished the top spot to Mark Wahlberg in 2017, he still pulled in $65 million through eight-figure upfront appearance fees in movies like Baywatch and Jumanji. His lead acting debut in The Scorpion King earned him $5.5 million, setting a Guinness World Record for the highest-paid actor receiving top billing for the first time. He had previously made his debut in the same role as a secondary actor in The Mummy Returns. However, his first acting role was actually portraying his father Rocky Johnson in a 1999 episode of That 70’s Show.

Johnson’s inflated wages are due to the fact that his movies make so much money. Nineteen of the movies he has acted in grossed over $100 million at the box office, with six of those pulling in over $600 million and two, both from the “Fast and the Furious” series, surpassing $1 billion. In total, his movies have grossed over $9.3 billion worldwide.

The Rock’s superhero appeal is reflected in his salary structure, nearly unmatched in Hollywood today. Beyond standard appearance fees that have surpassed the $20 million dollar mark, Johnson is paid up to $1 million for “social media support” per movie. Further, he receives a reported 30% of movie profit with additional incentives for revenue benchmarks worth millions of dollars.

Johnson is best known for his role as Luke Hobbs in the Fast and the Furious franchise, appearing in four movies in the series and earning over $50 million. He set to star in a spin-off of the franchise, titled Hobbs &  Shaw, alongside Jason Statham, to be released in 2019.

However, while Johnson is best known for his action films, his success has translated into a range of roles, including teaming up with Kevin Hart for the the comedy “Central Intelligence” – the highest grossing domestic comedy of 2016 with over $110 million – and as the voice behind Maui in Disney’s Moana. His biggest paycheck to date – $25 million – came from the disaster-movie blockbuster San Andreas in 2015. A sequel is already in production.

2. Everyone Knows Him as a Wrestler, but He Actually Started as a Football Player 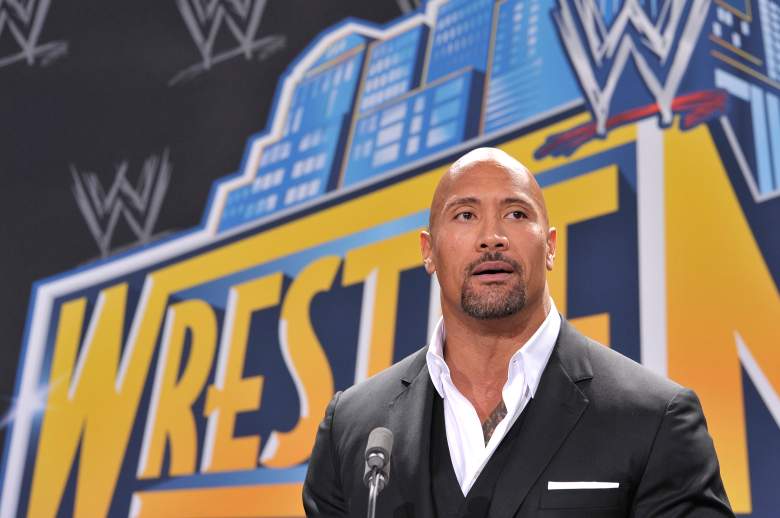 Dwayne “The Rock” Johnson attends a press conference to announce that MetLife Stadium will host WWE Wrestlemania 29 in 2013 at MetLife Stadium on February 16, 2012 in East Rutherford, New Jersey. (Getty Images)

Before he was known as Dwayne, he was“The Rock.” He made his name in professional wrestling, but his first career attempt was actually in professional football. A member of the 1991 National Championship team at the University of Miami, Dwayne Johnson played behind future NFL Hall-of-Famer Warren Sapp. Following college, Johnson tried out for the Calgary Stampeders of the Canadian Football League, where he made just $250 per week before being cut. Johnson has said the name of his production company Seven Bucks Production was inspired by the $7 he had in his pocket after moving back in with his parents when he did not make the team.

Following his failed attempt at football, Johnson embraced his family’s tradition in professional wrestling. Following his father and grandfather, Johnson became the first third-generation wrestler in professional wrestling in 1996, going under the name Rocky Maivia, a tribute to his father’s and grandfather’s wrestling names. After some adjustments to his persona, Johnson re-emerged as The Rock, becoming one of the most popular and well-known wrestlers in the world. While the WWE is notoriously secretive with its salary reports, it was reported that The Rock held around a 7% cut of merchandise sales, earning him up to $11 million since 2010 (he has been only occasionally involved in the company since 2004).

The Rock was not just a marketing champion – he was also one of the most successful in-ring performers in World Wrestling Federation (now WWE) history. He is an eight time WWF/WWE Champion, two-time WCW World Champion, and a five time WWF Tag Team Champion. He was the first wrestler to win the WWE Championship six times and then seven times.

Hulk Hogan called him “the biggest superstar in this business,” with John Cena describing him as “the biggest superstar in the history of WWE.” Even before acting, he was a ratings machine. The Rock main-evented the most bought pay-per-view worldwide in WWE history (WrestleMania XXVIII), the most bought pay-per-view domestically in WWE history (WrestleMania X-Seven), and the second highest attended event in the history of WWE (WrestleMania 29).

Though he left full-time wrestling in 2004, he has remained an occasional participant. In fact, it is rumored he made over $5 million to headline Wrestlemania 32, participating in the shortest Wrestlemania match ever. Not bad for seven seconds of work.

3. From Writing to Producing to Endorsing Products, He Does It All

Dwayne Johnson has tried is hand in many fields, finding failure but much more success along the way. Johnson is the author of the autobiography “The Rock Says…”. The book reached #1 on the New York Times Best Sellers List in 2000. The book outlined his upbringing (the son of a wrestling family growing up in New Zealand, Hawaii, and Florida), diverse background (Johnson is a Canadian-American whose father is Black Nova Scotian and Mother is American Samoan) and rise to superstardom in the WWE.

Johnson has also become a major producer, having founded Seven Bucks Productions alongside his former-wife and now business partner Dany Garcia. Seven Bucks has produced all of Johnson’s films since 2016, most notably creating Baywatch and the Emmy-nominated HBO series “Ballers,” in which Johnson also stars. The duo has also started a digital media company, Seven Bucks Digital Studios and an advertisement agency, Seven Bucks Creative.

Build the Belief. THIS THURSDAY #ProjectRock will drop one of @underarmour’s most anticipated collections of 2018: CHASE GREATNESS Project Rock is not a brand, it’s a movement. It’s a core belief, that I 100% don’t care what color you are, how old you are, where you come from or what you do for a living. The only thing I care about is you and I, building the belief that regardless of whatever the odds, we can overcome and achieve – but it all starts with the work we’re willing to put in with our two hands. This movement is much bigger than me. #BuildTheBelief #ProjectRock #UnderArmour #ChaseGreatnessCollection DROPS THIS THURSDAY.

Johnson, with his huge social media following, crossover appeal, and diverse background, is a valued spokesperson for major brands. Endorsements contributed around $50 million to his income in 2017. In 2016, Under Armour announced a global partnership with Johnson titled Project Rock, with the mission to create footwear, apparel and accessories inspired by Johnson’s fitness and film creations under the UA label. He is also helping to promote Under Armour’s Connected Fitness program. The deal is reported to be around $25 million per year. Johnson also serves as the “Ambassador of Service” and has starred in television ads for Ford, making him an additional $15 million per year. Johnson also appeared in a string of Got Milk? Commercials and a short film promoting Siri for Apple.

4. He Gives Back to Children Through Sports Programs, and Donates In Other Ways Too 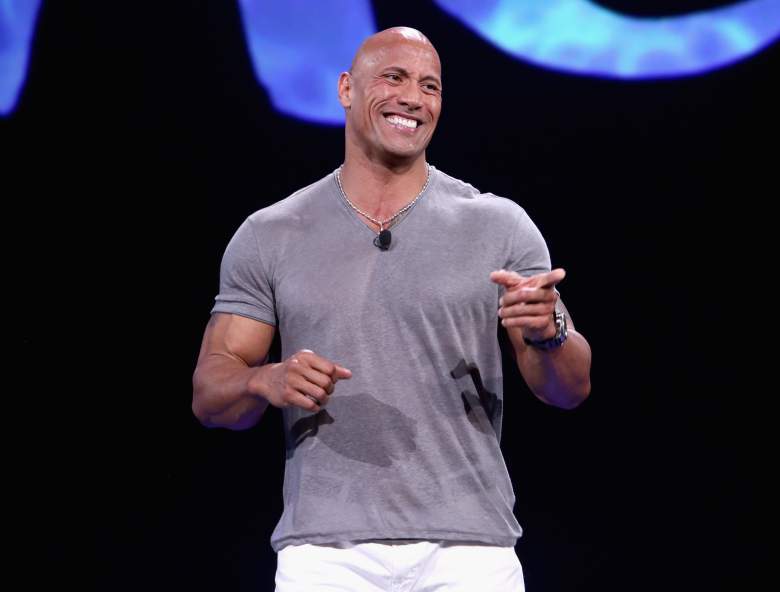 Johnson is an active philanthropist, having founded The Dwayne Johnson ROCK Foundation in 2007 to “enrich and empower the lives and self-esteem of children who are hospitalized for medical disabilities, disorders and illnesses,” according to its mission statement. True to his athletic background, The Rock Foundation also runs a physical fitness program that focuses on educating children about nutrition and good fitness practices.  Johnson is also a spokesperson for the National AfterSchool Association and serves as one of the directors of The Beacon Experience, a charity that supports students to continue their schooling beyond the high school years through special courses, mentoring and increased parental involvement.

In 2007, Johnson, along with his then-wife Dany Garcia, donated $1 million to Football Facilities Renovation Fund. This was the largest donation ever made to the University’s Athletic Department by a former student-athlete. The school named their football locker room after Johnson in honor of the donation and his accomplishments. Johnson donated $25,000 to the Red Cross in response to Hurricane Harvey in 2017.

5. He Brings His Own Gym to Film Sets, and Spends Money On Watches and Cars

Johnson is famous for his super-sized physique and he spends a lot of time (and money) to maintain it. The wrestler-turned-actor reports to spend around 24 hours a week working out. He even brings and installs his own full gym on the set of each movie. Five Thirty Eight reported that The Rock consumes around 5,000 calories a day over seven meals, including about 2.3 pounds of cod daily. That equates to over 820 pounds of cod a year at a price of $3,280. He has since cut the fish from his diet but still eats around 10 pounds of food a day.

When the pinky ring is still on… well that means we have a few more fun ? things we’re gonna do tonight. Thank you to my friends at @instylemagazine for the #ManOfStyle title. A good time and a very cool shoot. Enjoy the read and cap your year off with style. On newsstands now. (?@carterbedloesmith) #InStyle #ManOfStyle #MyPinkyRingMeansManyThings

Not all of his money goes to fitness however. Johnson is known to be fond of watches, suits, cars, and houses. His first major purchase in the WWE was reportedly a $35,000 Rolex – and he hasn’t stopped there. His car collection is numerous and impressive, including the super-rare $1.3 million Pagani Huayra, a white Ferrari LaFerrari, a Rolls Royce Wraith, a Ford GT, Mustang, and a custom F-150 (he is a Ford spokesperson after all). Johnson doesn’t stick to just the ground to get around. He is often seen flying in a Gulfstream G650, the fastest civilian aircraft in the world and, at $65 million one of the costliest.

His business acumen extends to real estate. According to Zillow, Johnson is one of the most active buyers and sellers of property in the past decade. He has sold at least 10 homes in Florida, including a $3.4 million mega-mansion outside of Miami.