Jacintha Saldanha, the nurse at Kate Middleton‘s hospital who was duped by Australian DJs in an infamous prank call, has been found dead in an apparent suicide.

DJs Mel Greig and Michael Christian on Wednesday called the hospital where Middleton was suffering severe morning sickness and convinced the nurse who answered the phone that she was speaking to the Queen and Prince Charles.

She took the bait and transferred the call to the Duchess’ private ward, where another nurse delivered details of Kate’s condition. 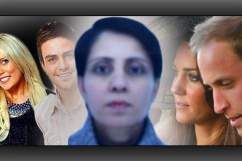 The prank made worldwide news.

And as early as this morning Christian was still celebrating the victory:

It’s almost show time!! The latest on the #RoyalPrank is coming up on the @hot30countdown!!

Now the butt of the joke is more than humiliated. She’s dead.

Multiple sources report the nurse, who was the on-duty receptionist at the time of the call, was found dead this morning at an address not far from King Edward VII hospital, where Middle was treated. She leaves a husband and two children.

The hospital released this statement:

It is with very deep sadness that we confirm the tragic death of a member of our nursing staff, Jacintha Saldanha.
Jacintha has worked at the King Edward VII’s Hospital for more than four years. She was an excellent nurse and well-respected and popular with all of her colleagues.
We can confirm that Jacintha was recently the victim of a hoax call to the hospital. The hospital had been supporting her throughout this difficult time.