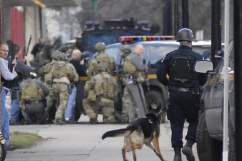 Standoff Continues in Herkimer, N.Y., Between Police and Kurt Myers

Kurt Myers, the NY gunmen who entered a barbershop and killed four people, has been shot and killed.

The man who went on an Upstate New York killing spree that left four victims dead at a barbershop and car wash has been killed by police after an all-night standoff.

Kurt Myers, 64, was shot and killed in a abandoned building on Thursday morning. The building was located at 248 N. Main St. in Herkimer County, NY.

SWAT teams entered the abandoned building where Myers were located at at 8 a.m. Thursday morning. They reportedly sent their SWAT team dog in first. Associated Press reported that Myers shot at the dog, then police opened fire on him and ended up killing him in the process.

He was waiting for us. He kills the dog. They hear shots fired. Our teams returned fire and the suspect gets shot.

Luckily, no officers were harmed or killed during the standoff with Myers. Governer Andrew Cuomo issued a press statement on the efforts of the police officers to the Utica Observer Dispatch:

We commend the courage and extraordinary efforts of the state police, the FBI, and local law enforcement officials in finding the suspect and ending this horrific spree of violence and bloodshed. It is now time for mourning those who we lost in this senseless act of violence. In the darkest of times, the bravery, kindness, and the spirit of community of New Yorkers shines the brightest, and that is what we saw yesterday in Herkimer and Mohawk as the community came together during this difficult time. The thoughts and prayers of my family and of all New Yorkers are with the friends and loved ones of the victims.

Loading more stories
wpDiscuz
0
0
Would love your thoughts, please comment.x
()
x
| Reply
Kurt Myers, who killed four people in a shooting spree on Wednesday, has been shot and killed by police.