The sinkhole that swallowed a truck in China.

A truck driver in China got into a rather unusual accident after a 30-foot-deep and 20-foot-wide sinkhole opened up underneath his vehicle. Although the man managed to escape unscathed, the enormous hole swallowed his entire truck.

“There was a rumbling sound and the ground started to rock. At first I thought it was an earthquake,” the unlucky driver told police. “Then there was a loud crack and I started to fall backwards as my truck was dragged into the hole. It was terrifying. I had no idea how deep it was or how far I’d fall.”

Experts have said the hazard in China was caused by an underground river that dissolved the limestone rock foundation of the road.

China saw another destructive sinkhole this year when an enormous gap in the southern Chinese city of Guangzhou destroyed five shops and split apart another building in January.

Sinkholes seem to be creating quite a stir in the news with bizarre incidents popping up — or should I say popping down — around the world. The recent tragic death of a man who vanished into a huge crevice in Florida is not the only mysterious sinkhole incident to have punctured the U.S.

The Florida sinkhole that took the life of a 36-year old man. 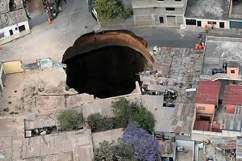 Just last week a golfer in Illinois suddenly plummeted 18 feet into the ground after a man-hole-sized crevice opened up on the course. On Tuesday in Washington, D.C., another sinkhole appeared, and a 17-foot-deep sinkhole was discovered on Wednesday morning in Holyoke, Massachusetts. There was also a nine-acre sinkhole in Assumption Parish, Louisiana, that garnered the attention of environmental activist Erin Brockovich. 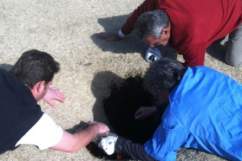 Do all these occurrences mean that we are suddenly in danger of falling into the an abyss without warning? According to geologists, sinkholes have opened up on a daily basis for as long as anyone can remember. The difference is that nobody paid them much attention until now.

“I don’t believe we’re having any more today that we’ve had before,” Randall Orndorff, director of the Geology and Paleoclimate Science Center at the United States Geological Survey, said in an interview. “They happen all the time.”