The Associated Press ‏was hacked and tweeted the above screen capture.
Twitter immediately erupted with tweets, some amusing some insightful, about the fake tweet.
Here are the best ones.

All: The main @ap Twitter account has been hacked, The tweets coming out of there are false. We are working to correct the problem.

To whoever hacked the AP Twitter account and posted that the president had been injured in an explosion: No. Just no.

AP Twitter hacked. This is why I keep all my passwords in a folder called “2012 New York Jets Highlights”. Who would want to look at that?

Reddit has identified seven people as the White House bombers

Someone hacked the AP twitter and didn’t start a Bieber-related hashtag? Amateurs.

AP twitter account gets hacked days after Anthony Weiner gets back on? What time is it in Seattle?

BREAKING: US federal officials say they will seek to declare the AP Twitter hacker an ‘enemy combatant’; will demand the death penalty 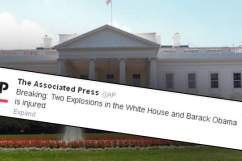