Lauren Holman Brown, the Georgia man who took five firemen hostage after faking a heart attack in Suwanee, Georgia, ordered food from the SWAT negotiator he was dealing with, which led to the dramatic and bloody end to the standoff. 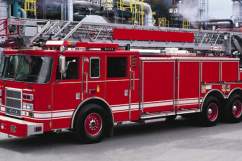 Brown ordered food for him and his hostages from Captain D’s Seafood Kitchen. In a scene out of an action movie, SWAT members, disguised as employees of the fast-food restaurant, delivered the grub and were able to ascertain the situation. They determined the firefighters were in immediate danger and a plan was made to raid the premises.

A hole was blown in the side of the home by the SWAT team who were on scene, to “distract and disorientate.” Cops used “concussion” flash grenades in addition to the initial explosion.

Brown shot first at the raiding SWAT team members, wounding an officer in the hand. That officer shot back and killed Brown. The cop is in good condition in hospital.

All of the firefighters involved in the hostage taking have been released from hospital after standard medical tests.