Apparently the Westboro Baptist Church had their constitutional right to deface American flags breached when law enforcement ordered the group to cease their protest, reports the Des Moines Register.

The WBC, who hail from Topeka, Kansas, have gained their international reputation from protesting funerals and other events blaming the world’s ills on God’s will, were accused of “dragging or otherwise treating the flag disrespectfully.” During this instance, the church’s actions, were enough to allow law-enforcement in Iowa to shut down their protest. 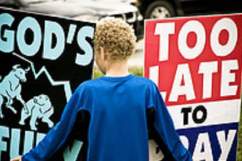 This lawsuit, being filed by the ACLU, is not seeking financial compensation, but rather the acknowledgement from a federal court that Iowa’s state laws prohibiting desecration of the American flag in constitutional.

Loading more stories
wpDiscuz
0
0
Would love your thoughts, please comment.x
()
x
| Reply
The Westboro Baptist Church does have some friends!