In a video obtained by Action 19 News, Cleveland kidnapping suspect Ariel Castro gets heckled by a reporter as he is led out of the police station a day before he pleaded “not guilty” to four counts of kidnapping and three counts of rape on Thursday.

Castro covered his face as we walked by the reporter who shouted questions at him like “What do you have to say to those women?” and “What kind of monster does this?” The alleged kidnapper remained silent and stared at the ground the whole time.

The suspect appeared in court Thursday morning and didn’t look up once from the time he entered the crowded court room at Cleveland Municipal court to the time he left. He is accused of kidnapping three women and keeping them captive for about 10 years while he beat and raped them. 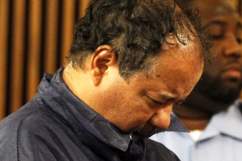 Loading more stories
wpDiscuz
0
0
Would love your thoughts, please comment.x
()
x
| Reply
"What kind of monster does this?"