Today Colorado Governor John Hickenlooper created the first legal, taxed and regulated market for marijuana when he signed three bills into law. The Colorado Senate passed the bills leading up to the historic signing:

House Bill 1317 creates a regulatory framework that sets consumption laws, determines licensing procedures of buying and selling marijuana and paraphernalia, and creates a legal limit of how much marijuana an adult can purchase at one time. Like any other product on the shelves at store, 1317 also mandates that all marijuana sold has an expiration date.

The bill passed the state Senate today in a vote of 29-6. You can read the full text of the bill here:

House Bill 1318 sets tax rates for marijuana. Like all products for sale, Colorado will, as of January 1, 2014, implement a 15 percent sales tax on marijuana sold. This 15 percent is added to the 2.9 percent sales tax Colorado already has on consumer goods. The bill was passed today in a Senate vote, 25-10. You can read the full text of the bill here:

House Bill 1325 was the final bill signed today by Governor Hickenlooper. This bill creates a legal framework that makes it illegal to drive under the influence of marijuana and sets a legal limit. If a driver is found with more than 5 nanograms of delta 9-tetrahydrocannabinol per milliliter in whole blood, than that person will be charged for Driving Under the Influence of Drugs. You can read the full text of this bill here: 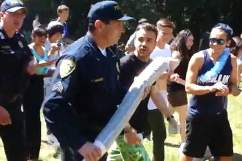