16 schoolchildren and one teacher were killed in Pakistan Saturday morning after their school bus caught fire, reports The News International. Seven other children were injured in the incident, five of which are in serious condition.

The bus was carrying 24 children, between the ages of five and 15, to a private school in Gujrat when it caught fire. The blaze is said to be caused by a spark when the driver of the dual-fuel van switched from gas to petrol.

“The fire erupted in the vehicle when the children were only a few kilometres from their school,” police official Dar Ali Khattak said.

Two children who survived by climbing out of a back window said they could smell gas before the fire broke out.

Another officer said the driver of the bus fled after the fire erupted. 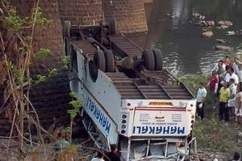 37 Dead After Bus Falls Off Bridge in India