Twelve years after the terror attacks of 9/11, construction crews today hoisted the final sections of the spire to the top of One World Trade Center. Formerly referred to as Freedom Tower, the skycraper now dominates the New York City skyline where the Twin Towers once stood.

The spire’s placement is a symbolic moment of closure and triumph for the city and for America.

Including the spire, the 104-story tower will stand at 1,776 feet, the tallest building in the Western Hemisphere. The 408-foot spire will serve as a massive broadcast antenna.

Today the spire was hoisted to the roof but was not be fully installed.

Below are images, in chronological order, of the WABC and NBC news livestreams of the event. 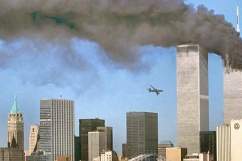