It appears the Westboro Baptist Church, who made its name, celebrating people’s deaths in the name of God’s vengeance, won’t shut up and allow people to grieve and mourn the losses suffered in Oklahoma. Today, Fred Phelps JR. The son of Westboro’s spiritual leader, Fred Phelps, is one of the church’s superior voices, is blaming the tragedy on recently outed-as-gay NBA player Jason Collins.

Collins announced he was gay in Sports Illustrated interview in early-May, his revelation was greeted with unanimous acceptance amongst the basketball community, including Oklahoma City Thunder small forward Kevin Durant. 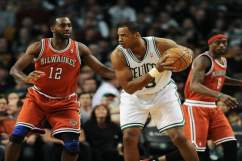 Just after the twister struck, the controversial church rejoiced at the devastating impact that the tornado had on the city of Moore, Oklahoma. 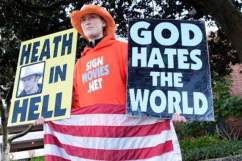 Westboro have continued to tweet today, adding to the misery of those in Oklahoma, even responding to a tweet from comedian Kevin Hart:

Don’t pretend to pray. Too late for that. God won’t hear. #OnlyTime2CountBodiesNowMT @kevinhart4real: Prayers go to families in Oklahoma.