The controversial Westboro Baptist Church, who made their name picketing the funerals of dead soldiers, somehow tying their deaths to the acceptance of homosexuality in society, have promised:

In this low-quality video, one church members attempts to explain the protesting of soldier’s funerals and their controversial signs:

Well this caps off a lovely week for the hating holy-rollers who early promised, and didn’t, to picket the funeral of young Nicolas McCabe, one of the children killed during the Moore, Oklahoma tornado. 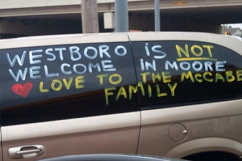 Did Westboro Baptist Church Just Get Arrested in Oklahoma?