Sometimes one decision can determine the rest of your life. For Wanetta Gibson it was lying and then telling the truth! Gibson, now 25, accused Brian Banks, now 27, of raping her when she was 15 and he was 17. On top of getting the football star falsely jailed for five years she was also awarded $750,000 after a settlement when suing Long Beach Schools. Although Gibson admitted that she lied all those years ago about what happened to her, she refused to repeat the story to prosecutors because she did not want to have to give up the money she had won during that time.

Now she is being ordered to pay not just the money she was awarded but also $1 million in damages as well as interest and legal fees to Long Beach Unified Schools Districts — a total of $2.6 million.

This news comes just weeks after Banks was signed to the Atlanta Falcons after training with them for a year. In a tweet he said:

After Gibson cleared Banks’s name after she recanted her story, Bank’s record was cleared of his conviction and he was signed to the Facons. She got publicly hated and bashed on social media and is now in debt over $2.6 million.

#BrianBanks what an amazing person, I hope he does well in his career and as for #WanettaGibson may she rot in #hell http://t.co/DmgZY659lv 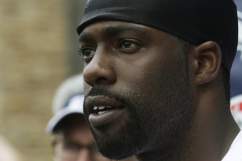