An horrific shooting erupted in St. Louis, Missouri office that killed four people. The attack occurred at 2715 Cherokee Street, a premises that aids start-up businesses in the area, reports KDSK. 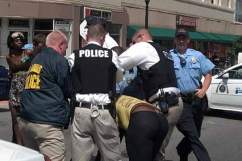 1. Four People Have Been Killed in the Shooting

In total, four people, two men and two women, were shot and killed in a murder-suicide this afternoon in St. Louis, Missouri. The tragic incident took place at a health care business, A K Home Healthcare, in the city. The weapon used in the killings was a semi-automatic handgun which was recovered by police, the killer was one of the dead men.

2. It All Started Over a Simple Office Argument

Word on Cherokee is multiple people are dead following a shooting. twitter.com/AllisonBlood/s…

The trouble broke out at around 1:40 p.m. local time at the AK Home Health Care, a business located in the Cherokee Place Business Incubator at 2715 Cherokee Street.

St. Louis Police Capt. Michael Sack, told reporters, that he had seen CCTV footage from the office. It appeared the man had a brief argument with three people in the office, and then opened fire. Sack said:

We don’t know if this is a prior thing that carried over.

3. All of the Victims Were Somali

It’s being reported that owner of the business was a Somali immigrant, as were all of his three employees. Michael Graff, a lawyer with an office in the same building, claims to have heard heated arguments emanating from the healthcare business.


The St. Louis Dispatch reported that later on Thursday afternoon, a woman dressed in traditional Muslim garb attempted to breach police lines. After being denied she threw herself on to the sidewalk, the woman’s nephew, Mohammed Ismail, 21, told the Dispatch:

All of the people, these are our family.

Another man who was with her confirmed that the victims were Somali immigrants.

4. 21 People Have Been Shot in St. Louis Since Monday

On Monday night, 17 people were shot overnight in St. Louis, this shooting adds to the rash of gun crime the city has been undergoing. None of Monday’s shootings were fatal, but Lt. Col Alfred Adkins told reporters on Tuesday:

We know that there were disputes that occurred before hand, which led to fights, which led to the infusion of firearms into these incidents, there are drug overtones in one. There are individuals who haven’t learned how to communicate with each other and solve differences. There are things dealing with prior relationships, intimate relationships on another.

5. Cherokee Street is Described as a “Creative” Neighborhood

Cherokee Street has been described as:

“The Cherokee neighborhood is an inviting location for young, creative St. Louis City residents to make their visions a reality.”
by Stefene Russell

The shooting occured at the Cherokee Place Business Incubator which rents space to fledgling businesses as they try to get off the ground. The building is in St. Louis’s charming historic Cherokee Street business district.

The building is owned by Will Liebermann, known in the neighborhood for renovating buildings. The St. Louis Dispatch reported in 2009:

Since he opened his business in 2005, Liebermann has filled about 20 live-work units that were previously unoccupied, bringing in about 40 new people to the street. He is working on filling 14 more.

In the last three weeks 13 people have died in St. Louis, 9 from a tornado and 4 from a shooting.