The second juror in the George Zimmerman trial to speak publicly told Robin Roberts on ABC’s Good Morning America that Zimmerman got away with murder for fatally shooting Trayvon Martin. 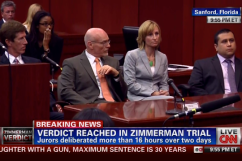 The woman, known as Juror B29 and only gave her first name, Maddy, told Roberts that she was going to be the juror that was going to give them a hung jury, but after the second day of deliberating, she realized that there was not proof to convict Zimmerman.

“You can’t put the man in jail even though in our hearts we felt he was guilty,” Maddy said. “We had to grab our hearts and put it aside and look at the evidence.”

She said the evidence, under Florida law, did not prove that the 29-year-old neighborhood watch volunteer intentionally murdered 17-year-old Martin.

Maddy, the only minority on the all-female jury, also told ABC that race wasn’t an issue during the trial. Though, she says that she has been troubled since the verdict was announced, wondering if she ultimately made the right decision or not.

“George Zimmerman got away with murder, but you can’t get away from God,” she said. “And at the end of the day, he’s going to have a lot of questions and answers he has to deal with.”

Check out the interview above!

Maddy, 36, is a nursing assistant and has eight children of her own. She said she was living in Chicago when Martin was murdered and was selected as a juror just five months after moving to Florida. 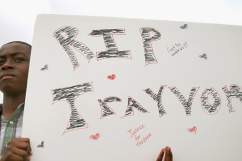