A suspect on the Most Wanted List along with two others have been taken into custody after crashing into two FBI cars during a high-speed chase through the streets of Philadelphia, reports NBC Philadelphia.

The FBI tracked down the man on Thursday and when they arrived on the scene the suspect took off. When the suspect realized the police were close behind him, he hopped into a black SUV with two of his friends led police no a high-speed chase that began around 4 p.m. at the corner of Trenton and Lehigh Avenues in Philadelphia’s Kensington neighborhood..

Witness Francis O’Brien said the wild chase was like nothing he’d ever seen before.

“There were so many guns out here, it was amazing,” O’Brien said. “I’ve never seen that many cop cars and FBI and police ever.”

The suspect reported threw out a gun halfway through the chase.

The chase culminated when the suspected crashed into two FBI cars and another after hurting two civilians. All three men were arrested are facing both local and federal charges. The gun found on the street was confiscated as well as a second found in the SUV. 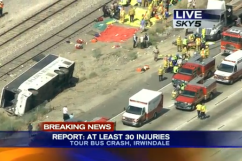 Read More
Breaking News, Car Chases, FBI, Pennsylvania, Philadelphia
wpDiscuz
0
0
Would love your thoughts, please comment.x
()
x
| Reply
A suspect on the "Most Wanted List" along with two others have been taken into custody after crashing into two FBI cars during a high-speed chase through Philadelphia.