The most affected counties are Boulder, Larimer and Jefferson northwest of Denver and El Paso County around Colorado Springs.

Major flood warnings remain in place throughout the state, residents are advised to keep checking weather.gov for further updates.

1. At Least Three People Have Been Killed

Sad news this morning, an unidentified body was recovered from Fountain Ck near Nevada and Las Vegas Sts. #WaldoFlood

The Associated Press have reported that rescue efforts have been severely hampered by the impassability of roads, especially in places like Jamestown, a small mountainous town with a population of just 205. The area around the town is under a mandatory evacuation order.

This was a devastating overnight storm in the area, and I anticipate that as the day goes on, we are likely to find other people who are victims of this storm. 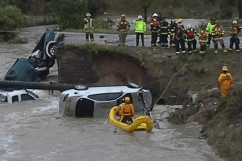 A fire crew are reported to be in peril as their truck was swept away by powerful flood waters. According to Pelle, the crew were huddled together at the foot of a mountain.

2. The Rain is so Powerful a Dam Has Been Broken

The Meadow Lake Dam, just south west of Colorado Springs was broken by the flooding. The area around the dam is reported to be sparsely populated but an extraction operation is underway.

The Associated Press reports that Larimer County sheriff’s spokesman John Schulz said three other dams in the area are in danger of being breached. Including the Lake Lawn Dam which was previously broken in 1982 during flooding that also killed three people in the nearby town of Estes Park. 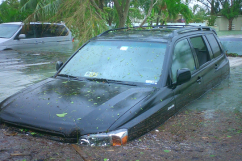 3. The University of Colorado Has Been Evacuated

Buildings across Boulder County are collapsing under the strength of the flood waters. Evacuation orders are in place for most of the county. Students staying in the dorms at the University of Colorado have been evacuated, reported to be around 400 people, classes are canceled at the school until further notice.

Boulder County appears to be the worst affected area. CNN reports that emergency dispatch services were dealing with calls “by the dozen.” As people continue to abandon their homes in the area, one shelter has already been put in place to house those who are homeless.

4. The Flooding Has Caused Mudslides

Mudslides have been reported in the area around Poudre Canyon, north of Denver and close to the Wyoming border. Highways around the area are closed due to damage, severely hampering rescue efforts. Poudre National Park lost power overnight. Flash flood warnings are in place throughout the county.

The rain continues to fall through Thursday September 12. A Weather Service warning says:

Capt. John Burt of the Colorado State Patrol said the flooding was caused by a major storm that spread into the Eastern Plains of the state and then retraced its path. The Associated Press report him saying: “It’s a different weather cell than we have seen in the past.”