UPDATE: At around 2:04 p.m., Diana Nyad, 64, become the first person to swim from Cuba to Florida without a shark cage. The entire trip took her over 54 hours.

The 64-year-old endurance swimmer Diana Nyad is within 5 miles now of becoming the first person to swim the 103 miles from Havana, Cuba to Florida without a shark cage or flippers. CNN reports that the remarkable distance already conquered has taken a toll on the swimmer’s body and that at the last meal time Nyad was slurring her speech.

She reportedly passed the mark of 10 miles from to her destination at around 4 a.m. EST Monday morning.

Her team is currently estimating that she will arrive in the Florida Keys between 2 p.m. and 4 p.m. EST. In the meantime however, her team says that she will need to avoid sharks, jellyfish, tides, and ships as she draws closer to her goal.

You can watch a live stream of Nyad’s swim over at CNN. 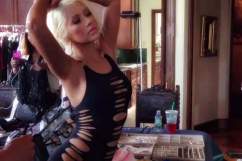 Loading more stories
wpDiscuz
0
0
Would love your thoughts, please comment.x
()
x
| Reply
The 64-year-old endurance swimmer Diana Nyda is only a few miles away from completing her life's goal of swimming the 103 miles from Cuba to Florida.