Me, @BilldeBlasio and his daughter Chiara. Beautiful family. An HONEST politician- elect him NYC! #MessiahComplex pic.twitter.com/Cr37pXqm0b

Russell Brand last night publicly endorsed Democrat Bill de Blasio in the race for New York’s mayoral election. Brand tweeted a picture of himself with de Blasio and de Blasio’s daughter (above) prior to the Brit comedian’s show at New York’s Town Hall in Manhattan. Before and after Brand’s show, de Blasio held court amongst prospective voters shaking hands and posing for photos.

While on stage, Brand implored NYC voters to elect de Blasio, not that it really matters considering de Blasio is ahead of Republican hopeful Joe Lhota by about 40 percent. The controversial comic did note that in the past when he’s given political advice to Americans, it hasn’t quite worked out.

De Blasio, flanked by his kids, laughed along with the rest of the audience at Brand’s outrageous, eh, Brand of comedy, including one gag that stated that Fox News’ talking head Bill O’Reilly, “never had an orgasm that didn’t end up on his stomach.” 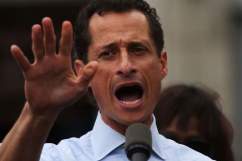