The families of the eight people who were killed on a Tennessee interstate on October 2 will not get conclusions to what caused the accident anytime soon, reports NBC News.

The government shutdown means that the National Transportation Safety Board’s investigators are furloughed until further notice. Sharon Bryson, a spokesperson for the NTSB, told NBC:

In this particular case I think it’s highly likely that we would have responded to it, but again, with our investigators furloughed, it’s impossible to do that. All of our highway investigators are furloughed. 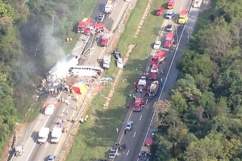 The crash, which occurred in Jefferson County, Tennessee, along Interstate-40, has so far claimed the lives of eight people. As many as six of those people are believed to have been from the Front Street Baptist Church in North Carolina and were returning from a fall jubilee in North Carolina. Of the dozen or so more who were taken to hospital after the crash, two remain in critical condition. Initial reports indicate the churchgoers bus blew a tyre before spinning out of control, hitting a tractor trailer and an SUV before flipping over.

Police investigating the horrific accident have said that identifying all of the deceased may take days, with only one, John Wright, named so far, reports WRAL.

Read More
Breaking News, Politics, Tennessee
Follow Heavy ↓
The horrific church bus crash will not be investigated by the NTSB due to the government shutdown.