State Trooper James Herane was driving down the highway with his in-training partner when he saw a boy’s frantic parent flagging him down on the highway.

Julian Estrada, 13, had a piece of food in this throat and couldn’t breathe. Fortunately, as the dash-cam footage reveals, James saved the day, performing the Heimlich Maneuver on Julian, and saving his life.

Julian’s parents were helpless prior to the troopers’ arrival and she said they, “Acted like angels for us.” The rookie-in-training helped too, the fluent Spanish speaker comforted Julian’s mother during the rescue.

After the gnarly piece of food was dislodged, the troopers stuck around a bit and comforted the family and everything turned out a-ok. 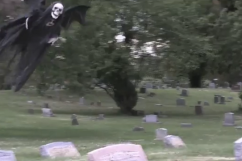