Breaking reports of a shooting outside of the US Capitol Building in Washington D.C. report that weapons were fired in the area around at around 2:30 p.m. DC time. This is a breaking story so stay tuned for updates to the videos. See full story below: 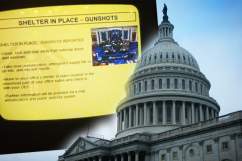 Footage of the Crime Scene, Newscasts

NowThisPolitics reports from the Capitol saying “alarms are going off. We’re on lockdown because gunshots were reported outside.”

This Vine reveals police on their way to the Capitol building, according to AnneWheaton

Loading more stories
wpDiscuz
0
0
Would love your thoughts, please comment.x
()
x
| Reply
Shots were fired today near the Capitol in a shocking Washington DC tragedy. Here are videos showing the event that depict the damage and happenings.