A Walmart store in White Plains, New York has been evacuated after a bomb threat was made, reports News 12. The bomb threat was reportedly made at 12:40 p.m. local time. Local Police Chief James Bradley told Lohud.com, “Wal-Mart received two threatening phone calls shortly before 1 p.m. and made the decision to evacuate the store.”

1. The Store Has Been Reopened

The store has reopened after the evacuation. Streets around the Walmart were closed as SWAT teams moved in on the store. White Plains police are being assisted by units from Westerchester County to help with investigation.

2. The Store is in the Heart of White Plains’ Business District

. It Isn’t Known if this Was a Legitimate Threat

There are no reported injuries. News 12 reports that police “do not believe the incident is suspicious.”

The threat comes on Black Friday, the biggest shopping day of the year.

A Walmart in Troy, Michigan on Black Friday 2013. (Getty)

5. This Walmart Has Had Previous Horrific Incidents

The same Walmart was the scene of a horrific sexual assault, when a man sexually attacked a 7-year-old girl in the toy section of the store in April 2013. 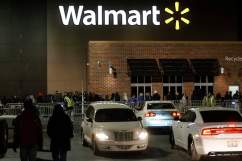 Black Friday Stabbing Occurs After Dispute at a Virginia Walmart

Loading more stories
wpDiscuz
0
0
Would love your thoughts, please comment.x
()
x
| Reply
A Walmart in White Plains, New York has been evacuated after a bomb threat was made on Black Friday.