Sixteen-year-old Ethan Couch killed four people with his truck in June of 2013 in Tarrant County, Texas. On December 12, 2013, a judge announced Couch would not serve any jail time.

1. He Was Very Drunk When He Crashed Into 4 Pedestrians

A plaintiff’s petition filed by the parents of a teenage boy paralyzed in Couch’s accident gives a detailed account of the night of the crash.

According to the petition, on June 15, 2013, Ethan Couch stole beer from a local Walmart and retired to his parents’ home, where he drank enough to post a blood alcohol level of .24, roughly three times the legal driving limit.

Meanwhile, Breanna Mitchell’s SUV had broken down, and her friends Hollie and Shelby Boyles drove out to help. Brian Jennings, a local youth pastor and good Samaritan, pulled over to assist the women.

Site of the crash. (Screenshot via ABC News 8)

All four were killed when Couch drove his pick-up truck through them at 70 mph. Two of Couch’s friends were riding in the bed of the pick-up and were tossed from the vehicle. One of whom was Sergio E. Molina, whose parents, Maria Lemus and Sergio Molina, are the plaintiffs in the aforementioned lawsuit. Sergio has been in a vegetative state since the night of the accident.

Lemus and Molina are suing Ethan’s parents Fred and Tonya Couch, as well as Fred’s company Cleburne Metal Works. They are seeking $20 million in damages.

The full text of the plaintiff’s petition can be viewed here:

A psychologist testifying for the defense diagnosed Couch with “affluenza,” a term popularized by British psychologist Oliver James to describe a pathological valuing of material wealth over all else. Couch’s psychologist, G. Dick Miller, uses “affluenza” somewhat differently. For Miller, the term describes a condition in which a wealthy child is so over-indulged, he loses the capacity for responsible behavior.

According to the Star Telegram, Miller testified that Ethan was never disciplined, and enjoyed freedoms “no young person should have,” including the freedom to drive since the age of 13:

Local station KHOU reported that Miller testified Couch’s family “felt that wealth bought privilege and there was no rational link between behavior and consequences.” The defense argued that Couch’s parents deserved as much blame for the crime as their son, and that Couch’s life could be turned around if he cut off all contact with them for a one- to two-year period of intense psychological treatment.

A story in the AP gathers reaction from prominent psychologists who specialize in disorders related to wealth. They are unanimous in their objection to Couch’s sentencing. Dr. Gary Buffone of Jacksonville, Florida, tells the AP:

“Essentially what he has done is slapped this child on the wrist for what is obviously a very serious offense which he would be responsible for in any other situation. The defense is laughable, the disposition is horrifying … not only haven’t the parents set any consequences, but it’s being reinforced by the judge’s actions.”

Dr. Suniya Luther, a psychologist at Columbia University, who researches the costs of affluence in suburban communities, argued that the Couch sentence reflects a dangerous double standard:

“What is the likelihood if this was an African-American, inner-city kid that grew up in a violent neighborhood to a single mother who is addicted to crack and he was caught two or three times … what is the likelihood that the judge would excuse his behavior and let him off because of how he was raised?”

In her research, Luther found that 20 percent of upper middle-class adolescents believed their parents could get them out of a sticky situation at school. Luther believes Couch’s sentence will reinforce this perception of immunity, noting the message sent is “families that have money, you can drink and drive. This is a very, very dangerous thing we’re telling our children.” 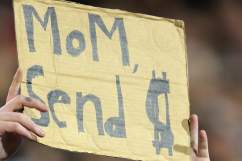 3. Couch Has Been Sentenced to 10 Years of Probation

In keeping with the psychologist’s recommendation, the Texas District Court Judge Jean Boyd ordered that Couch would not be released into the custody of his parents, but would instead be entered into a private counseling center that, according to the Huffington Post, will cost his father $450,000.

According to The Dallas Morning News, the counseling center, located just outside of Newport Beach, California, offers “chef-prepared meals, equine therapy, martial-arts training, yoga and nature hikes.” Thus providing a “respectful recovery environment” in which wayward teens can get “the unconditional love they require.”

Couch’s defense attorney, Scott Brown, told KTVT that the sentence will “keep Ethan under the thumb of the justice system for the next 10 years, and if Ethan doesn’t do what he’s supposed to do, if he has one misstep at all, then this judge, or an adult judge when he’s transferred, can then incarcerate him.”

4. Families of the Victims Are Outraged

According to CBS’ affiliate in Dallas Fort Worth, families of the four killed sat “stunned and in tears” as the sentence was announced.

“There are absolutely no consequences for what occurred that day. The primary message has to absolutely be that money and privilege can’t buy justice in this country.”

According to CNN, it is very rare, but not wholly impossible for prosecutors to challenge a sentence on the grounds that it is too lenient.

5. Couch’s Sentence Encourages the Notion That Some in the U.S. Are ‘Too Big to Jail’

Boyles’ argument connects the Couch case to a larger critique of the American justice system that has gained prevalence in the wake of the financial crisis, and the Department of Justice’s determination that certain bank executives were so central to the functioning of the economy, it would be reckless to prosecute them. This logic helped birth the phrase “too big to jail.”

In the years since the crisis, best-selling books by Michelle Alexander and Glenn Greenwald, titled The New Jim Crow and Liberty and Justice for Some, respectively, further popularized the notion of a two-tiered American justice system, where the elite are subject to a distinctively different set of rules than the rest of the population.

In Greenwald’s book, he writes about a similar incident, in which a hedge-fund manager named Martin Joel Erzinger drove his vehicle into a bicyclist in Vail, Colorado, and promptly sped away. Committing a hit-and-run is a felony in Colorado, but the local district attorney chose not to press charges, explaining:

“Felony convictions have some pretty serious job implications for someone in Mr. Erzinger’s profession.”

Which leads Heavy to conclude, if you aren’t a hedge-fund manager, you cannot be fired for committing a felony anywhere in Colorado.

The argument offered by Couch’s attorneys offers similarly radical political implications. The idea behind the “affluenza defense,” that extreme wealth and privilege can be psychologically damaging, resonates with a growing body of sociological research that shows a negative correlation between social status and empathy. Other studies have demonstrated that upper class individuals have greater difficulty recognizing the emotions of others.

Berkeley psychologist Paul Pliff hypothesizes that the cause of this discrepancy lies in the wealthy’s sense of freedom and independence from others, telling Scientific American that the less we rely on others, the less we tend to care about their feelings.

Which isn’t to suggest that it’s impossible to be both wealthy and compassionate, or for Ethan Couch to emerge from years of therapy a productive member of society. But in the context of record economic inequality, the arguments offered on both sides of the Ethan Couch case warrant concern. According to the defense, extreme wealth warps rationality and responsibility. According to families of the victims, extreme wealth can subvert the American legal system. Evidence suggests both are right.

Couch’s sentencing has garnered so much outraged attention, it’s beginning to emerge as a potentially significant issue in Texas politics. According to a report from WFAA, the ABC affiliate in Dallas, both the Republican and Democratic candidates for governor have expressed concern over the judge’s decision.

The Republican candidate, Attorney General Greg Abbott has announced that his office will be looking into the Couch case, to determine whether or not the sentence can be appealed.

Democratic gubernatorial hopeful Wendy Davis called the judge’s decision a “disgrace,” at an event celebrating the opening of her campagin headquarters, continuing:

“I don’t know what can be done after the fact in terms of that decision, but most certainly from a legislative perspective, we’ve got to look at the fact that judges are able to make decisions like that and determine whether we need to make some adjustments in the law,” Davis said.

A petition at change.org, asking current Governor Rick Perry to remove Judge Jean Boyd from the bench has gained over 7,000 signatures at the time of this writing.

Loading more stories
wpDiscuz
7
0
Would love your thoughts, please comment.x
()
x
| Reply
Sixteen-year-old Ethan Couch won't go to jail for killing four people while drunk driving because he was suffering from "affluenza" — spoiled so rotten by his rich parents that he doesn't know right from wrong.