Affluenza, a combination of influenza and affluence, is the condition that a person’s wealth can affect their psyche and decision making ability. The term “affluenza” has gained national attention after it was used a defense in the case of Ethan Couch, the Texas teen who killed four people while he was drunk behind the wheel. Couch was let off with ten years probation for the crime. His defense team cited affluenza as one of the reasons behind Couch’s role in the tragedy.

The Affluenza Project defines the condition as:

Simply put, affluenza is a harmful or unbalanced relationship with money or its pursuit. Clinically, Jessie defines affluenza in the individual as the collective addictions, character flaws, psychological wounds, neurosis and behavioral disorders caused or exacerbated by the presence of or desire for wealth.

Here’s what you need to know about this mysterious condition:

1. Doctors Believe the Condition Results in Feelings of Worthlessness

Those who believe in affluenza contest that a person’s wealth leaves them with a sense of worthlessness and dissatisfaction rather than happiness. Through this, those affected, have trouble with personal relationships and marrying consequences with actions. 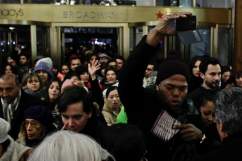 2. It’s Most Prevalent in English-Speaking Countries

Oliver James, a British psychologist who has done extensive research into affluenza, has found that areas like Japan and mainland Europe had less unhappiness generated through wealth as English-speaking countries. James’ definition of affluenza is:

placing a high value on money, possessions, appearances (physical and social) and fame.

James asserts that those in English-speaking nations place wants over needs and through this affluenza is born.

3. In Australia, There Has Been a Backlash Against Affluenza

Muslim women pray at the “Feast of the Sacrifice” in Bangladesh. (Getty)

Australian researchers, Clive Hamilton and Richard Denniss, wrote a book on the subject called Affluenza: When Too Much is Never Enough. Through it, they discovered that many Australians were “downshifting” and relinquishing their incomes and personal belongings in exchange for more concrete life goals.

4. There Are Those Who Don’t Believe in the Condition

Some studies have shown that the average American worker is unaffected by affluenza. (Getty)

One study on the condition showed “little evidence of the hypothesized level of affluenza in the American working population.”

According to the Associated Press, The American Psychiatric Association does not recognize affluenza as a legit condition. The association did so in their most recent manual in May.

5. The Condition is in the News

Texas teen Ethan Couch used affluenza as a defense in his drunk driving trial. Four people were killed as a result of Couch’s actions. He was given ten years probation in lieu of jail time. Couch was shown on CCTV footage buying beer prior to the crash. At the time of the accident he was three times over the legal limit. A psychologist for the defense stated that Couch had been taught by his parents that wealth buys privilege.

Loading more stories
wpDiscuz
0
0
Would love your thoughts, please comment.x
()
x
| Reply
Affluenza is the condition of wealth affecting the psyche of a person. It's a combination of Influenza and Affluence. It was used in the defense of Ethan Couch.