Martin Bashir has been officially flushed down the toilet. #tcot #tlot #tgdn pic.twitter.com/fLXGntcIaE

Conservatives rejoiced today as progressive MSNBC host Martin Bashir quit the network over an ill-advised comment he made on November 15 regarding former vice-presidential candidate Sarah Palin.

Basically, he suggested that he wished a slave owner would make a slave sh*t in Palin’s mouth. See the clip here:

Prior to today’s announcement, he had been on leave for several weeks.

After making an on-air apology, I asked for permission to take some additional time out around the Thanksgiving holiday. Upon further reflection, and after meeting with the President of msnbc, I have tendered my resignation. It is my sincere hope that all of my colleagues, at this special network, will be allowed to focus on the issues that matter without the distraction of myself or my ill-judged comments.

I deeply regret what was said, will endeavor to work hard at making constructive contributions in the future and will always have a deep appreciation for our viewers — who are the smartest, most compassionate and discerning of all television audiences. I would also wish to express deepest gratitude to my immediate colleagues, and our contributors, all of whom have given so much of themselves to our broadcast.

Bashir’s career may not survive this latest scandal. He barely landed on his feet in the American media after fleeing the U.K. in 2005 following a disastrous 2003 documentary on Michael Jackson that was widely panned and discredited.

At the time, The New York Times called his style “callous self-interest masked as sympathy.” 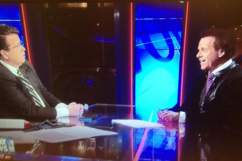