The Omaha police are quick to write off children as “thugs” because of their guardians. A January 7 post on the Omaha Police Officers Association website sparked controversy this week when they posted the video above with the title, “Heartbreaking Video Shows ‘The Thug Cycle’ Continuing.”

The video, which depicts an African-American toddler being surrounded by profanity and encouraged to curse by unseen adults, makes the absurd assertions that because of these curse words, he is doomed to a life of crime. The post says:

We here at OmahaPOA.com viewed the video and we knew that despite the fact that it is sickening, heartbreaking footage, we have an obligation to share it to continue to educate the law abiding public about the terrible cycle of violence and thuggery that some young innocent children find themselves helplessly trapped in…Now while we didn’t see anything in this video that is blatantly “illegal”, we sure did see a lot that is flat out immoral and completely unhealthy for this little child from a healthy upbringing standpoint.

The Omaha police claimed that they found the video when a “loyal follower” sent them the video, which was posted on a “local thug’s Facebook page.” They offer no evidence as to what makes the Facebook user a “thug” other than their use of profanity around children.

The police even make unproven allegations like, “We can only assume that the female voice is likely the child’s mother, and if that’s true that means she actually allowed this behavior to occur.”

Meanwhile, the Omaha Police Department is also being sued by the ACLU for excessive force, false imprisonment, and conspiring to destroy footage of the abuse, all of which was caught on footage. Check out the story and the video here. 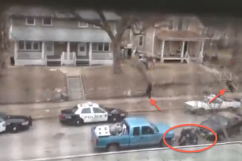