The ACLU is officially filing suit against the Omaha Police Department over a March 2013 incident that was caught on tape. The suit alleges that the OPD is guilty of false imprisonment, the use of excessive force, and conspiracy in the form of destroying evidence.

The incident, which you can watch above, began when police attempted to tow cars on Seward Street. This is when the plaintive, Octavius Johnson, emerged from his home to question the officers about the towing of his car. It as at this point you can see an officer approach him from behind, grab him by the neck, and throw him to the ground. For the rest of the video, Octavius Johnson is on the ground with a police officer’s knee in his neck.

Meanwhile, across the street, Juaquez Johnson, Octavius’ brother, is filming the incident. While filming his brother being thrown to the ground, Juaquez challenges the cops with questions like “Why is your knee on his neck?!” He is repeatedly backed away from the scene by an officer.

The scene on Seward Street after backup was called multiple times.

The officers call for backup multiple times, and then, at about 2:14 into the video, an officer changes his mind and decides he does not want Juaquez filming. He chases Juaquez into his home and is quickly followed by 10 other officers, making 14 total on the scene.

Meanwhile, neighbor Demetrius Johnson (no relation) was also filming in the incident on his porch and through his windows. Police then arrived at his house and, according to the complaint, “jumped on Demetrius and despite his lack of his resistance, assaulted him.” Sharon Johnson, Demetrius’ wheelchair-bound aunt, ended up being thrown onto the floor in the scuffle.

You can read the full complain below: 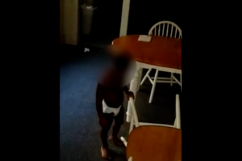 Read More
Breaking News, Nebraska, Police, Raw Videos
Just when you though it was safe to film police.