Here’s one you haven’t heard. What do two doves, a seagull, and a crow have in common?
Ask the Pope.
Pope Francis, along with two children, released two white doves from a Vatican City balcony as a “peace gesture.” Unfortunately for the two doves, Mother Nature had a different gesture in mind. Fox News reports:

As tens of thousands of people watched in St. Peter’s Square on Sunday, a seagull and a large black crow swept down on the doves right after they were set free from an open window of the Apostolic Palace.

Twitter immediately blew up about the bird war. Scroll down to see pictures and comments by users.

A wondrous photo: merciless crow of hate attacks dove of peace that was released by Pope Francis. pic.twitter.com/FeIMhtLFS5 (via @DavidKenner) 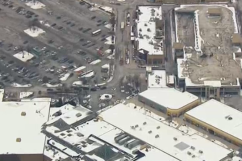