In May 2013, the FCC proposed a plan to investigate whether online, print, and television news outlets were meeting the public’s “critical information needs.” The “CIN” study was interpreted by many conservative news outlets as a tactic that allowed the Democratic administration to criticize them for going after certain news stories. Since the public backlash to the plan, the FCC has backed down, for now. According to the Washington Post, the study has already cost around $500,000.

Here is what you need to know about the plan and the controversy it caused:

The CIN study procedure would have involved government researchers asking participants in all levels of media organizations questions about the process by which their company chooses what stories to cover.

According to a Washington Post report, among the questions the FCC proposed to ask journalists were, “Have you ever suggested coverage of what you consider a story with critical information for your [viewers, listeners or readers] that was rejected by management? What was the reason given for the decision?”

You can see the full official guiding document for the study below:

After the study was announced, conservative news outlets believed they were about to become a victim to government censorship as the FCC set out to explore what stories were and were not in the public interest.

A high-ranking Republican at the FCC, Ajit Pai, published his response to the call for the study in the Wall Street Journal. Pai writes, “… everyone should agree on this: The government has no place pressuring media organizations into covering certain stories. Unfortunately, the Federal Communications Commission, where I am a commissioner, does not agree.”

Pai goes on to say:

Should all stations follow MSNBC’s example and cut away from a discussion with a former congresswoman about the National Security Agency’s collection of phone records to offer live coverage of Justin Bieber’s bond hearing? As a consumer of news, I have an opinion. But my opinion shouldn’t matter more than anyone else’s merely because I happen to work at the FCC.

3. The FCC Canceled Plans for the Study Amid Backlash

This week, amid the public backlash that the FCC could use its power over license renewal for TV and radio stations to manipulate news coverage, the commission withdrew its plans to conduct the survey.

4. The FCC Issued a Response to Assure Critics

On February 14, FCC Commissioner Tom Wheeler published a letter to Congress attempting to dissuade any fears over the study. The letter assures Republican congressman Fred Upton that the study seeks only to improve media competition by identifying “market barriers.”

You can read the full letter above.

5. An Online Petition Against the Study Got Almost 90,000 Signatures

The American Center for Law and Justice (ACLJ) has been the flag-bearer for the fight against the FCC since the study was announced in May 2013. The ACLJ is a public-interest organization that focuses on constitutional politics and the defense of evangelical Christian issues in the United States.

The petition for “No Government Monitors in Newsrooms,” posted on the organization’s website, has received almost 90,000 signatures. 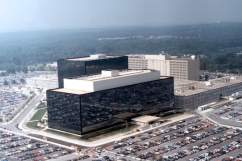 Read More
Breaking News, FCC, Government, Media, Politics
The FCC has backed down on its attempt to study how news agencies choose whats stories to cover.