One of the world’s most dangerous and wanted men was arrested last night after a late night raid in a Mexican beach resort town. Joaquin “El Chapo” Guzman was taken alive by Mexican marines. He is wanted in multiple countries for running a violent cartel and drug empire that allegedly spans around the globe.

Here is what you need to know about the man and the arrest:

1. He Was Captured By Mexican Marines

According to the AP report, the Mexican marines carried out a raid in an unidentified Mexican beach resort town during which Guzman was taken alive and peacefully. He was found only with an identified woman and, according to Mexican authorities, not a single shot was fired.

2. Authorities Have Been Breaking Down His Empire

Guzman’s drug cartel, Sinaloa, has been on the defense the last few weeks after new victories re-invigorated anti-drug authorities. According to the AP, at least a dozen mid to top-level cartel operatives were arrested in the last few weeks, including the co-founder of Sinaloa’s son who was arrested by U.S. authorities after crossing into Arizona.

Another top lieutenant was reportedly killed when helicopter gunships fired into his estate.

3. He Has Been on the U.S.’s Most Wanted List For Years

Guzman is wanted for drug trafficking charges in both the United States and Mexico and has been on the Drug Enforcement Agency’s most wanted list for years .

4. He Was Considered One of the World’s Most Powerful People

In 2013, Forbes named Guzman the 67th most powerful person in the world. They estimated that the “self-made man” and his cartel were raking in an estimated $3 billion a year and were responsible for 25% of all illegal drugs brought from Mexico to the United States.

According to Forbes, “This February the city of Chicago branded him the first “Public Enemy No. 1″ since Al Capone.”

In 1993, Guzman was arrested in Guatemala and extradited back to Mexico where he was sentenced to 20 year in prison for drug trafficking, conspiracy, and bribery. In 2001, after paying an estimated $2.5 million in bribes and implicating almost 80 people, Guzman escaped from prison. 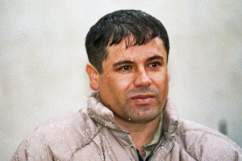