Pasieka is considered at large after he left the scene of the crime in his green Ford explorer. It’s alleged that Pasieka stabbed six people, killing two, at Loblaw’s grocery warehouse at around 2:15 local time. According to Global News Canada, one of those killed was Pasieka’s supervisor, who was stabbed in the neck. Cops searched the area around Loblaw’s twice looking for Pasieka but police believe he fled the vicinity.

In 2009, Pasieka was involved in a terrifying dispute with his neighbor where he was charged with assault and making death threats, reports The Edmonton Sun. He was also accused of burning a heart shaped fire in the street outside the home of Devon Sandford and his family, including three children (above).

Here's a pic of the suspect in the Loblaw's fatal stabbing. 29YO Jayme Pasieka is still at large. pic.twitter.com/Obz1LiHnOK

When Pasieka was arrested over the 2009 dispute, cops found military style clothing, some bear spray, some utility knife belts and a baton. When asked why he had terrified the family, he claimed to have done it “for the queen.” Devon Sandford told the court he believed that Pasieka was infatuated with his wife. When asked if this was true, Pasieka said he wanted to get to know the neighbors. For his crime, Pasieka was sentenced to probation, reports The Toronto Sun. 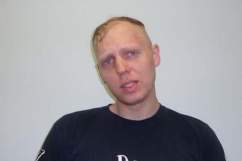 PHOTOS: Jayme Joshua Pasieka, The Pics You Need to See

4. Pasieka Had No Friends at His Work

A witness and co-worker at Loblaw’s said that Pasieka had no friends at the job. In 2009, he was listed as being an oil field worker. He had also told cops that he wanted to join the police or the army.

5. A Psychiatrist Called Him ‘Normal’

A 2011 pshychiatric assessment of Pasieka found him to be “normal.” He had been assessed during his trial in 2011 for terrorizing the Sandford family, reports The Toronto Sun. After being sentenced to probation, Pasieka was forced to have psychological, drug and alcohol counseling and was forbidden from possessing weapons.

PHOTOS: Jayme Joshua Pasieka, The Pics You Need to See