The Maersk Alabama pictured in 2009. (Getty)

Jeffrey Reynolds and Mark Kennedy, both 44, have been named as the two retired U.S. Navy SEALs who were found dead onboard the famed Maersk Alabama while it was docked in the Seychelles, reports The New York Post.

The ship, Maersk Alabama, was the subject of two previous pirate attacks while sailing off the coast of eastern Africa. One of those attacks was turned into the popular Tom Hanks movie Captain Phillips.

1. They Were Contracted to Trident Security Systems

The two retired Seals were part of a security detail onboard the vessel. They were both employed by the security contractor Trident Security Systems. Kevin Speers, a senior directory at Maersk, spoke about the nature of security personnel on these voyages:

Contracted security is part of anti-piracy protection plans to safeguard crews and vessels. In Maersk Alabama’s case, she is persistently in high-risk areas since she provides feeder service to the east coast of Africa. The vessel was cleared to complete cargo operations, and she is now at anchor awaiting further instructions.

According to Mark Kennedy’s LinkedIn page, he was honorably discharged from the U.S. Navy in March 2010 after serving 20 years. This included 13 as a Navy SEAL. In addition to this, Kennedy served time as a medic in the Louisiana National Guard and that:

I have an Associate’s degree, am well spoken, and have the professional demeanor of an experienced operator and instructor. I have a current United States passport, current physical with updated shot record, a TWIC card and am capable to deploy for long periods of time.

Kennedy’s combat record included tours in Aghanistan and Iraq. Reynolds was a ten-year veteran of the Navy.

2. Reynolds & Kennedy Were Found Dead in the Same Cabin

Both were found dead in a cabin onboard the ship on February 18 at around 4:30 p.m. local time. According to CBS News, both men died of respiratory failure and suspected heart attacks. Their deaths may have been caused by drug use. There was traces of heroin and syringes found in the cabin.

3. The Coast Guard Is Investigating

According to the U.S. Coast Guard, authorities will lead the investigation into the deaths of Reynolds and Kennedy. Coast Guard Senior Chief Petty Officer Daniel Tremper told the media:

We are monitoring the report involving the two citizens and we offer our condolences to the two families. An investigator from Coast Guard Activities Europe is engaged in a Coast Guard investigation but due to the nature of the investigation that will be about all that we can provide right now.

State Department spokesperson Marie Harf said that the Coast Guard is obliged to investigate the deaths as the Maersk Alabama is a U.S. flagged ship. A detective with the Seychelles police, who are also investigating, told the media, “I don’t think foul play has been suspected.”

4. They Had Been Working on the Ship Since January 29

According to Kevin Speers of Maersk, both Reynolds and Kennedy came onboard the ship on January 29. Their deaths were, according to Speers, “not related to vessel operations or their duties as security personnel.”

5. Their Security Firm Was Founded by Navy SEALS

The security contractor that Reynolds and Kennedy worked for, Trident Group, is based in Virginia Beach, reports Pilot Online.

According to the company’s website, it was founded by retired SEALs, and:

Trident Group entered the security market as one of the first companies to emerge, pre-9/11, for the sole purpose of maritime industry security support. We have successfully provided Terrorist Vulnerability Assessments to ports and maritime service facilities – handling sensitive materials, such as Liquefied Natural Gas (LNG) and Propane Gas. 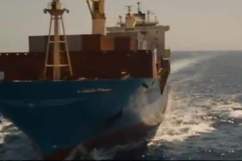 Loading more stories
wpDiscuz
0
0
Would love your thoughts, please comment.x
()
x
| Reply
Jeffrey Reynolds and Mark Kennedy have been named as the two U.S. Navy SEALs who were found dead onboard the Maersk Alabama on February 18.