Steven Dale Green, 28, of Midland, Texas was found hanging in his cell at a maximum security prison in Tuscon, Arizona on Saturday. In 2006, as a US Army Pfc, Green participated in one of the most horrific war crimes to arise out of the invasion of Iraq. Here’s what you need to know:

1. He Was Stationed In An Area Known As ‘The Triangle of Death’

In 2005, Private Steven Dale Green began a tour of duty with Bravo Company, First Battalion, 502nd Infantry, stationed 20 miles south of Baghdad, in an area known as “the triangle of death,” where thousands had died in sectarian violence since 2002.

Green told NBC News in an interview from December 2010, that upon arriving in the area “his training to kill, the rampant violence and derogatory comments by other soldiers against Iraqis served to dehumanize that country’s civilian population.”

NBC noted that the only moment in their interview with Green when he appeared to get choked up or have difficulty speaking, came when he talked about the deaths of those two men. He told them how Sgt. Casica was always making jokes. He said, “Those deaths messed me up real bad.”

According to the New York Times, in the four months following the sergeants’ deaths, “seventeen battalion members were killed, two of them mutilated after being kidnapped; of those killed, eight belonged to Mr. Green’s Bravo Company of about 110 soldiers.”

All this death intensified Green’s hostile feelings towards the Iraqi population. He told NBC: “There’s not a word that would describe how much I hated these people. I wasn’t thinking these people were humans.”

Green sought help from a military stress counselor, describing symptoms consistent with those of PTSD. Lt. Col Karen Marrs provided Green a mood regulating drug and a sleeping medication, but did not remove him from combat.

At his trial, psychiatrist Pablo Steward testified Marrs’ treatment “does not meet the acceptable standard of care.” He argued that many soldiers with PTSD, who normally would have been removed from the battlefield, were retained so as to satisfy the need for combat troops, arguing Marrs was “trying to please her command and at the same time treat her patients. I can see that’s an almost impossible job.”

Nation writer, Allison Kilkenny notes that the director of Europsychology at the University of Pennsylvania School of Medicine, Ruben Gur, after reviewing a 2008 MRI of Green, testified that he had been suffering from brain damage, and that people with his kind of brain injury often experience major difficulties checking impulses, saying: “They won’t have the brakes and they’ll be easily aroused into action.”

In the last months of his enlistment, Green, and Spc. James Barker, and Sgt. Paul E. Cortez, spent most days drinking and getting high at their checkpoint, complaining about how they felt abandoned by the army, and oggling the 14-year-old daughter of a nearby family, as she went about her household chores.

2. He Raped a 14-Year-Old Girl After Killing Her Family, Then Shot Her In the Face

Barker testified that he pitched the idea of raping Abeer al-Janabi to Cortez, who oversaw the checkpoint. Green was invited along, for the fact that he was always talking about wanting to kill Iraqis.

Cortez said that while he greenlit the rape, he didn’t realize the family would be killed.

Once inside the home, Cortez and Barker took Abeer into one room, while Green held the mother, father, and youngest daughter at gunpoint in another. Pfc. Jesse V. Spielman stood guard in the hall.

Cortez and Barker raped the teen. Green shot her family dead. Green then took his turn with Abeer, shooting her in the face when he was finished. The soldiers set fire to the girls’ remains before leaving.


3. He Was Accepted into the Army on a Moral Waiver

Days before Green showed up at a Texas recruitment office looking to ship out, he was sitting in a nearby jail on possession charges. The war criminal was then just a 19-year-old, unemployed high-school dropout who’d just notched his third misdemeanor.

Green showed up at just the moment the Army began granting moral waivers with nearly 50% greater frequency. These waivers allowed those like Green, with histories of delinquency and minor criminal charges to participate in the nation’s failing war.

Green’s parents, John Green and Roxanne Simolke, divorced early in his childhood. Green moved with his mother from his birthplace in Midland, out to Seabrook, Texas, a city southeast of Houston.

The New York Times spoke with Willy Godfrey, a classmate of Green’s in the sixth grade at Seabrook Intermediate School, who said of him:

“He was always, like, in trouble, doing something in school. He was always getting into a fight or saying something mean to a teacher. Something weird. It was just out of place. Gradewise and stuff, I don’t know if he did good or bad. But he did not mix well with other people. He was basically mad, or something like that.”

In 2000, he returned to Midland to live with his father. He dropped out of high-school two years later.

Three years after that, he followed hundreds of other new recruits into a baptismal pool, in back of an Army chapel in Fort Benning, GA. All seeking God’s blessing, before heading off to war.

4. He Found Catholicism In Prison

Green told NBC in 2010 that he’d discovered Catholicism while incarcerated, and was corresponding with a nun in Louisville about his faith. He described his life in prison as lonely and hazardous. He’s been attacked multiple times by other prisoners, who view sex offenses as the lowest of all crimes. He’s also had to contend with his own memories of the attack, of the girl, of her family.

“If I thought that was an OK thing now,” he said, “I wouldn’t be much of a human being.”

In the immediate aftermath of the attack, the soldiers attempted to blame the deaths on “insurgents.” Green was discharged after being diagnosed with an anti-social personality, before he and the other soldiers were found to have been responsible. Green was therefore the only soldier who was subjected to a civilian rather than a military prosecution. He became the first man prosecuted under the Military Extraterritorial Jurisdiction Act, signed in 2000, which gives the federal government the power to pursue criminal cases against U.S. soldiers for acts committed in foreign lands.

The three other soldiers most immediately involved in the attack, Spielman, Cortez and Barker, are serving lengthy sentences at Fort Leavenworth prison. All will be eligible for parole next year.

According to the LA Times, Green’s lawyer Darren Wolf believed that Green had recently been placed in protective segregation, following a dispute with other inmates. Wolf said he’d received a letter from Green sometime in the last two months, in which Green had expressed excitement about an upcoming visit from a documentary filmmaker.

Wolf said Green’s death “adds another tragedy to a long list of tragedies that already existed in this case. It’s another indication of how horrific this case has been for everyone involved.”

5. The Death Toll From Fighting In Iraq Reached a 5-Year-High Last Year

The BBC reported this January that at least 7,818 civilians and 1,050 members of security forces were killed in ongoing violence in 2013. This figure is the highest since 2007, though significantly below that recorded in 2006, when Green was serving.

In October of last year, researchers from the U.S., Canada and Iraq published a study in the journal PLoS Medicine, which estimated 405,000 deaths were caused by the invasion of Iraq, projecting another 55,800 deaths unaccounted for due to extensive migration into and emigration out of the country during the war. Sixty percent of these deaths are believed to have been violent, the other 40% resulting from infrastructure issues resulting from the invasion.

In 2010, more American soldiers killed themselves, than died in combat.

The original version of this article maintained that Green’s mother served six months in jail for a drunk driving arrest in 2000. This information came from a New York Times profile of Green from 2006. The author later received an email from Green’s mother Roxanne Carr contesting this purported fact, explaining that in her life she’d spent only single night in jail, for that DUI in 2000. She said she did not seek a correction from the Times in 2006, because she’d been able to avoid media scrutiny up to that point, and wished to continue to do so. 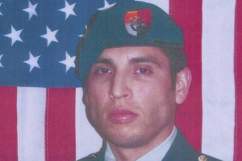 Loading more stories
wpDiscuz
0
0
Would love your thoughts, please comment.x
()
x
| Reply
Steven Dale Green, a former Army Private who raped and killed a 14-year-old Iraqi girl, after murdering her family, was has died of an apparent suicide in jail.