Lauren Cosgrove is the fiancee of T.J. Oshie, the new darling of Team USA after his game winning shot against Russia at the Sochi Olympics. According to media reports, just after Oshie hit the shot heard round the world, the first voice he wanted to hear was that of his pregnant girlfriend back in St. Louis.

1. They Just Got Engaged

Oshie proposed to Cosgrove just days before he left for the Sochi games on the couple’s third anniversary on February 4. The couple moved to St. Louis together in 2013. The couple live in the posh suburb Creve Couer. 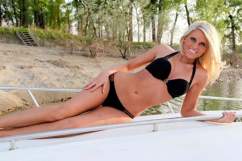 2. Pregnancy is the Only Thing Keeping Her From Sochi

The couple are expecting a baby girl who is due on March 17. She told reporters that she would be at the Sochi games if she wasn’t eight months pregnant. She also expressed concern that she might go into labor before Oshie gets back from Sochi. In an interview with St. Louis Today, Cosgrove said:

A slew of emotions came over me when T.J. scored the final goal. There’s so much going on in our lives. I wish I was over there, but being 33 weeks pregnant, I’d only last an hour and then I’d have to be horizontal.

3. They Met in College 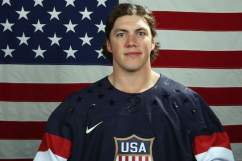 4. She’s Been Dealing With Her Newfound Celebrity

She told KSDK in St. Louis, that since Oshie’s winning goal against Russia, her phone has been ringing off the hook. Cosgrove told the station it’s been “surreal.” She had intended to watch the game and then run errands but was stuck in talking to reporters on the phone. One of the calls came from Oshie, she says: “He was like, ‘Oh I hope this all blows over pretty quick.’ It’s exciting for him, but this isn’t really him, he’s so low key.” In a later phone call Oshie told his fiancee, as she recalled:

He called me said these people were interviewing him, really big-named people, and he was shocked that they wanted to talk to him. He said it was pretty surreal.

He said it was time to make a peanut butter and jelly sandwich and go to bed. That was his post-game meal.

She’s also joked about Oshie’s newfound mega-stardom, “He’s been a heartthrob for a while her in St. Louis, but yeah I’m sure he’s enjoying every minute of it.” Later, Cosgrove told St Louis Today that Oshie had confessed to her prior to the games that he didn’t know tie games went to a shootout in the Olympics.

5. Cosgrove Was Tweeting Her Nervousness

She live-tweeted her experiences watching the game on February 15:

I literally can't handle this

Her sister, Anna, who was watching the games with Lauren, chipped in:

She almost went into labor peeps

Lauren told KSDK that she believes her fiance and Team USA can go all the way: “I definitely have faith in Team USA and I think they have a shot at the gold.”