Draft Day is here! Here’s everything you need to know about first round draft pick Blake Bortles. Formerly a QB for UCF, he’s gone to the Jags…so Florida football fans should be pretty stoked.

"We're here! So happy to have my brother Colby at Radio City with us tonight." – @BBortles5 pic.twitter.com/zaohksVvWQ

CBS Sports writes that Blake plans to spend his big NFL salary to send his brother to college. Colby, his brother, is a freshman baseball player at Ole Miss. Colby has a baseball scholarship, but that doesn’t give him a full ride.

2. Blake Bortles Is Considered a Risky Draft Pick by Some

“Bortles is far from a finished product, which you can say for almost every college player, but it carries even more weight in this case.

His mechanics, decision-making and ball control are not at a level that should see him on an NFL field within his first year. “

Despite this “risky” rating, Bortles was drafted much higher in the rankings than every expert predicted.

NFL draft prospect QB Blake Bortles has picked @JColeNC song "Blow Up" as his walk up entrance song for when he gets drafted.

On the NFL Draft profile for Bortles, it is revealed that he is 6’5″ and weighs 232. The profile has a number of impressive stats that showcase this player’s athletic prowess:

Blake is dating the lovely Lindsey Duke, and is often asked about dating her during press interviews.

5. Blake Bortles Was Expected to Be Drafted by Cleveland Browns, Went to Jaguars Instead

First round or not, Blake Bortles is still winning pic.twitter.com/hheGWlNy0F

Prior to the Jaguars snatching up Bortles, it seemed possible that the Browns would snag Bortles.

“Bortles had a 45-minute one-on-one meeting with Browns owner Jimmy Haslam during his visit to Cleveland last month, and got a good vibe from the club.” 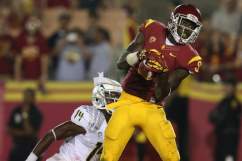 Read More
2014 NFL Draft, Blake Bortles, Football, NFL, Sports
Follow Heavy ↓
Blake Bortles is poised to become the hottest new star in the NFL. Here's everything you need to know about him.