Marquise Lee is a wide receiver who many expect to be a first round draft pick at the 2014 NFL Draft. Here’s everything you need to know about this USC alum.

According to ESPN's Chris Mortensen, "everybody in the league" believes USC WR Marqise Lee will not get past the Packers at No. 21.

ESPN notes that Marquise Lee’s father is deaf, and that Marquise uses sign language to communicate with him. Lee’s mother, who was forced to relinquish custody of him when he was quite young, is also deaf.

2. One of Marquise Lee’s Brothers Was Murdered in a Gang-Related Incident

Marquise Lee has a number of tattoos that have great personal significance to him. One tattoo (a tombstone) memorializes his older brother Terreal. This brother was shot in the back in a gang-related incident.

Lee’s other brother, Donte, is currently serving time for attempted murder. Lee has a praying hands tattoo that symbolizes his concern for his brother.

In 2012, Lee earned the coveted Fred Biletnikoff Award. This award is bestowed upon an outstanding receiver in American college football, as determined by the Tallahassee Quarterback Club Foundation, Inc.

According to his NFL Combine stats, Lee is six feet tall and weighs just under 200 pounds. He can do a 127 inch broad jump, and has arms that are 31 3/4 inches long.

“Understands how to manipulate man and zone coverage and can create separation when he needs to uncover. Very good hand-eye coordination. Tracks the deep ball very well — has a knack for running underneath it. Attacks the ball and plucks it out of the sky. Very good competitive, functional playing speed. Has game-breaking return ability — exceptional vision and traffic burst.”

5. Marquise Lee May Be Drafted to the Jets

WR Marqise Lee has arrived at the 2014 NFL Draft. pic.twitter.com/lmfUO5pR9f

NBC Sports notes that Marquise Lee is likely to go to the Jets, and that Lee is pleased about that fact. Lee stated:

““They’re a great organization…They made me feel at home and made it feel like a place you want to play.”” 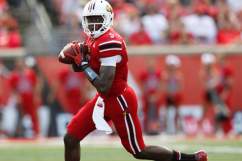 Read More
2012 NFL Draft, Football, Marquise Lee, NFL, Sports
Marquise Lee is a wide receiver who many expect to be a first round draft pick at the 2014 NFL Draft.