Above you can watch terrifying footage from the town of Doboj in Bosnia, where an intersection went from dry to underwater in less than five minutes. This flooding is particularly scary for residents of the area because flooding moves landmines placed during the wars that tore the region apart in the 1990s.

In some of the worst flood the region has ever seen, sparked by heavy rains, tens of thousands of people have been evacuated from their homes in Serbia and Bosnia.

According to the Guardian, flooding has already caused a death toll of around 27 in Bosnia and 16 in Serbia, although authorities believe this number will go up. 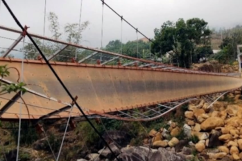 Read More
Breaking News, Raw Videos
In the Bosnian city of Doboj, intense flooding caught in a shocking video shows the city going from dry to underwater in minutes.