The 2014 NFL Draft is almost here, and one of the most hotly debated topics is whether openly gay athlete Michael Sam will get drafted, or get left in the dust. Here’s what you should know about this talented athlete.

1. Michael Sam Played For the University of Missouri as a Defensive End

Sam played college football for all four years at the University of Missouri. He was a defensive end, and was named the SEC Defensive Player of the Year in his senior year.

2. Michael Sam Has 50-50 Chance of Making the NFL Draft, According to Nate Silver

Had a chance today to meet an NFL legend that has had my back @michaelirvin88 – much love and gratitude #HOF pic.twitter.com/Yfpe6I361V

Nate Silver, who skyrocketed to fame after using a mathematical model to predict President Obama’s re-election, has written a blog post about Michael Sam’s odds of being drafted by the NFL. Silver predicts Sam has just a 50% chance of getting drafted.

“If Sam is not chosen in the draft, we won’t be able to say for sure it’s because of his sexuality,” Silver writes.

As we previously reported when Sam came out in February, some NFL insiders don’t believe the league is ready for an openly gay player.

In February, shortly after coming out, Sam dropped 70 spots on CBS Sports’ Draft Prospect Board overnight.

If Sam does get drafted into the NFL, he would be the first openly gay player in the history of the league.

Bound by their unbreakable will. We're proud to name @MikeSamFootball the recipient of the 2014 Ashe Courage Award. pic.twitter.com/JIrOCbO5YY

Sam has been named the winner of the Arthur Ashe Courage Award.

The award is given to individuals who “transcend sports.” Sam will accept the award at the 2014 ESPY Awards, which will be held on July 16.

5. Michael Sam Doesn’t Want to Be Filmed During the NFL Draft

CBS Sports reports that Sam doesn’t want anyone photographing or taping him while he watches the draft. With a very real chance that he will not be drafted or picked up as a free agent, his reluctance to be watched is understandable to many football fans. 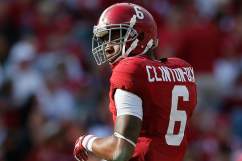 Loading more stories
wpDiscuz
0
0
Would love your thoughts, please comment.x
()
x
| Reply
The 2014 NFL Draft is almost here, and one of the most hotly debated topics is whether Michael Sam will get drafted, or get left in the dust. Here's what you should know about this talented athlete.