The 87th final of the Scripps National Spelling Bee is taking place tonight in National Harbor, Maryland, just south of the nation’s capital where kids from across the country will be spelling words we have never heard of. Dr. Jacques Bailly, 1980 Scripps Spelling Bee Champion is the official pronouncer of the Bee this year. Click here to watch the live stream on ESPN from 8-10 pm Eastern.

The Scripps National Spelling Bee is the biggest and longest-running educational promotion in the United States, originating in 1925, and run on a not-for-profit basis by The E.W. Scripps Company and local spelling bee sponsors. The competition is administered all around the the world including all of the Department of Defense Schools in Europe, Canada, China, Ghana, Jamaica, South Korea, Japan, the Bahamas, Puerto Rico, The U.S. Virgin Islands, Guam and American Samoa.

My favourite sporting event of the year is on! PVR set to record the Scripps National Spelling Bee, finals are tonight. #spellingbee

Read more to find out about the competitors, rules, prizes and more.

The final 12 students will come back tonight to compete for the championship. (Getty

We will never be as happy about anything as Jacob Williamson is to make the finals of the #spellingbee #WinnersWin pic.twitter.com/suxgdgcl4i

Arvind V. Mahankali sits with his trophy after winning the championship round at the 2013 Scripps National Spelling Bee. (Getty)

The champion will take home a $30,000 cash prize from Scripps along with a Scripps National Spelling Bee engraved trophy and medal, along with $2,500 in U.S. savings bond and a complete reference library courtesy of Merriam-Webster. Encyclopedia Brittanica awards the winner $1,200 of reference works consisting of a 3-year membership to Britannica Online Premium and Britannica World Atlas, the Britannica Global Edition and the 1768 Encyclopædia Britannica Replica Set Deluxe Edition.

The school and sponsor of the Champion receives a 1-year subscription to Microsoft Office 365 Home and a 20 gigabyte OneDrive online storage for each student in the school.

Those who lose in the first round of the Championship Finals up to 7th place receive $1,500. From there, top 6 are awarded:

All Semifinalists get a $500 gift card and a medal from the Scripps National Spelling Bee and the rest of the participants receive prizes from Merriam Webster, Mr. Jay Sugarman and packages form Microsoft.

3. They Aren’t Even in High School

This year’s Scripps National Spelling Bee began with 281 spellers, the youngest at the age of 8 and the oldest at 15. Over 86 percent of the competitors are between the ages of 12 and 14, 51 percent of them girls and the other 49 percent boys. In this group of young brainiacs 138 of the 281 kids can speak more than one language, but the majority favor math as a favorite subject.

The National #spellingbee just reminds me of how few words I actually know. I just assume those words are all rare donkey diseases.

Here are the age and grade ranges of the participants:

(This year’s grade statistics are normal compared to those in the previous years.)

The historical competition is known to have family ties with each year’s group having a sibling or family member who has participated in the past. Spellers Vanya Shivashankar and Ashwin Veeramani both have siblings who have won the Scripps National Spelling Bee.

4. Here Are the Contest Rules

Jonathan Caldwellreacts during the semifinal round at the Scripps National Spelling Bee. (Getty)

There are particular formats for the Preliminary, Semifinals and Championship Rounds. Three main rules for eligibility are that the speller must not previously have been declared champion of the Bee, they must attend a school approved by the Bee, and the participants can not have passed 8th grade before February 1 (2014).

5. The Past 6 Winners have been Indian-Americans 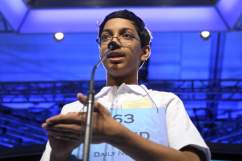