Jon Meis is the hero to come out of the Seattle Pacific University shooting. The 22-year-old, who was in the location of the shooting, disarmed the gunman, Aaron Ybarra, who had already killed one student and injured two others.

Without Meis’ intervention and selfless act, there is no telling how many more lives could have been lost.

Here’s what you need to know about the courageous young man who is being called a real-life superhero.

1. He Volunteered to Work at the Security Desk

With a gunman on campus, student Jon Meis made a split-second decision that likely saved lives http://t.co/xgZbTLC0x5 pic.twitter.com/luYRrkXWy9

At the time of the gunman’s rampage, Meis was working as a monitor, sitting at a desk in the lobby in Otto Miller Hall, where the gunman opened fire.

When Ybarra stopped to reload, Meis seized the opportunity.

A lot of (students) were in that building, and he stopped him in the lobby. He didn’t get any farther than that. I’m grateful for him, yeah.

2. He Used Pepper Spray on the Gunman

His classmate, Briana Clarke, told the Seattle Times that he “sprayed the attacker in the face, grabbed him around the neck and then wrestled him to the ground.”

After his heroic action, Meis reportedly explained the event to Ryan Salgado, his roommate.

Salgado said that Meis has a habit of always carrying pepper spray with him.

Matt Garcia, another of Meis’ roommates, tweeted this:

I'm proud of the selfless actions that my roommate, Jon Meis, showed today taking down the shooter. He is a hero. #prayforSPU #SPUshooting

At the Christian university, he was an electrical engineering student. His Linkedin page shows that he graduated from Seattle Pacific in 2014.

According to ABC News, he is also a teaching assistant.

His family friend told the Seattle Times that he is excels academically, and is also involved in student government.

He is marrying Kaylie Sparks on June 21 in Seattle.
According to the bride-to-be’s Facebook profile, she attends Seattle Pacific.

Family friend, Melissa Engstrom, said, “He had a lot to lose. He is getting married this summer.”

5. He Was Taken to the Hospital

The hero, who was visibly shaken, was put on a stretcher and taken to Harborview Medical Center. He was not injured.

Hospital spokeswoman Susan Gregg told ABC News that he was released.
She added:

Obviously he’s undergoing mental anguish…There were no visible injuries. It was, I think, coming to grips with what happened, the trauma of seeing what happened to his fellow students. 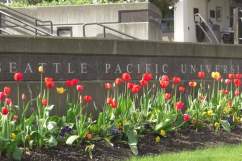