Twitter is full of people expressing their sympathy for the three police officers killed and two other officers shot in Moncton, New Brunswick, Canada on Wednesday night.

Police say the rampage was carried out by 24-year-old Justin Bourque, whose Facebook page is littered with posts about guns, violence and anti-police sentiment.

The police are doing an amazing job ❤️❤️#RCMPNB

If a cop writes you a ticket today, shake their hand and thank them for their service to the public. #PrayForMoncton

In honour of the @RCMPNB fallen officers, flags at Hamilton Police Stations are at half mast #PrayForMoncton pic.twitter.com/1So51GKl8E

I hope the 3 brave people that passed away tonight realise that they have gone heros , all for saving everyone around them, #prayformoncton

I know a lot of my followers don't even know where Moncton is but please keep us in your thoughts. #PrayForMoncton pic.twitter.com/y2AhPmq9GM 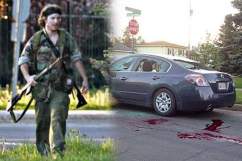