A student at Reynolds High School in Troutdale, Oregon was shot dead Tuesday morning by a gunman who is also dead, cops said. Neither the victim nor the gunman have been identified.

Students also tweeted that a bullet grazed the hip of teacher Todd Rispler — a detail police did not confirm.

Here are the tweets you need to read about the developing story:

I'm staying out of the way while forensics team looks for evidence around my livetruck. Found an unused shotgun shell pic.twitter.com/DBgU1kW7JX

POLICE SOURCE: Shooter dressed in all black w AR-15 and vest and helmet. Cornered in bathroom by officers.

Thoughts go out to folks at Reynolds HS in Oregon – a rival high school of my alma mater. Too much violence in this world.

Active shooter at Reynolds High School. Many of my club team attends that school. Praying everyone is ok…..

Thank God no fatalities at my alma mater, Reynolds (Columbia) HS, Troutdale, Oregon. Why do these shootings keep happening?

stay safe Reynolds, were all think if you this morning

My heart goes out to my friends from Reynolds High and all the people affected.

Reynolds school district employee says they're working to "reassure parents" now, parents should NOT come to the school for children #CNN

stay safe Reynolds, were all think if you this morning

Praying those who are involved with the Reynolds High School shooting.

# Reynolds update 8:57 a.m.: Police are reporting that there were 3 shooters; two fled the scene. 1 caught at a church across the street.

Praying for Reynolds High School this morning. This has to stop. #NotOneMore 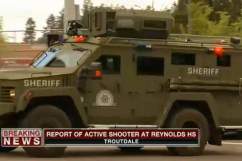