Robert Downey Jr.’s son was arrested on Sunday afternoon in Los Angeles after cops spotted him smoking something out of a pipe inside a car. Indio Downey, 20, was charged with felony narcotics possession and released from jail just after midnight Monday morning.

Indio checked into rehab after becoming dependent on prescription pain medication in October, according to the National Inquirer. Indio’s mother and Robert Downey Jr.’s ex-wife, Deborah Falconer, told the Inquirer, “He was not addicted. He was taking one pill a day,” and that her son was receiving holistic therapy in treatment.

Falconer is a musician and former model. She and Downey Jr. married after only dating for 42 days. Indio is her and Downey Jr.’s only son. They married in 1991 and divorced in 2004.

Robert Downey Jr. released a statement to TMZ Monday morning as news of his son’s arrest spread. He said:

“Unfortunately there’s a genetic component to addiction and Indio has likely inherited it. Also, there is a lot of family support and understanding, and we’re all determined to rally behind him and help him become the man he’s capable of being. … We’re grateful to the Sheriff’s department for their intervention, and believe Indio can be another recovery success story instead of a cautionary tale.

Indio Downey is a member of a Los Angeles group called The Seems, whose music resembles that of The Strokes, according to MTV. Indio plays guitar and sings. According to the band’s website, they’re due to release an EP soon. The video above features their first single, “Buysexual.” He’s played in some of Los Angeles’ most famous venues, including The Viper Room, The Roxy and The Troubadour.

3. He’s Acted With His Father

Indio Downey played the younger version of his father’s staring character in the 2005 film “Kiss Kiss, Bang Bang.” Downey plays Harry Lockhart, a petty thief who poses as an actor and auditions for the role of a detective in an upcoming film. The film also stars Val Kilmer and Michelle Monaghan. The film only earned a two-and-a-half star rating from Roger Ebert, with his review reading, “I dunno. I liked Downey’s pose that he was writing the movie as he was living it, and Kilmer’s gay detective, who functions as a parody of gay parodies. But did I need to see it twice? Not really. Do you need to see it once? Not exactly.”

4. Cop Say He Was Found With Cocaine

Cops say they found Indio Downey with cocaine when they conducted the traffic stop near the intersection of Santa Monica Boulevard and La Cienega in Los Angeles. He was released on $10,250 bail.

After spending time in prison from 1996 to 2001 for various drug charges, Robert Downey Jr. entered rehab in 2003 and started seeing a therapist. He admitted to being addicted to cocaine and heroin and doing drugs with his own father and other celebrities, including Jack Nicholson. 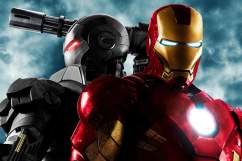 Loading more stories
wpDiscuz
1
0
Would love your thoughts, please comment.x
()
x
| Reply
Robert Downey Jr.'s son, Indio, was arrested in West Hollywood Sunday afternoon on felony narcotics charges after the car he was riding in was pulled over.