Tonalist will go down in history as the race horse who stole the bid from California Chrome in the last leg of the Triple Crown in the 146th Belmont Stakes. The talented thoroughbred had 15/2 odds coming into the race which seeded him in 4th place, where California Chrome ended up ironically in the end. Watch the video above to see Tonalist clinch the title.

Here is what you need to know about the Belmont Stakes winner:

1. Robert S. Evans is His Owner

Evans currently lives in Greenwich Connecticut with the wife of his three children. He became involved in racing because of his father, Thomas Mellon Evans, who started Buckland Farm in 1964. His father’s farm Buckland owned Kentucky Derby and Preakness winner Pleasant Colony who took both legs in 1981.

2. Christophe Clement is His Trainer

Tonalist’s trainer is 48-year-old Christophe Clement, a quick witted Frenchman who settled in Garden City, New York in 1991. Both Clement’s father and brother were prominent horse trainers in France where he learned his trade. Tonalist’s win in the Belmont Stakes was Clement’s first Triple Crown win, despite his reputation of being a grass trainer.

He’s just a great trainer. This horse [Tonalist] happens to like to run on dirt. We’re not going to show him grass except to eat it.”

3. Joel Rosario is His Jockey

Dominican born, Joel Rosario arrived in California in 2006 and quickly became a successful jockey in the states. Rosario grew up near a horse track near Santo Domingo and quickly became enamored in the sport, turning pro at the age of 14.

In 2009 he finished fifth in the country with earnings of $13 million, climbed to third place in 2010 and then proceeded to win his third consecutive Del Mar and Hollywood park titles along with the Santa Anita Crown in 2011.

In 2013, he won the richest horse race in the world with a $10 million stake at the Dubai World Cup followed by the 2013 Kentucky Derby.

Tonalist won the third leg of the Triple Crown, beating out the top competitors in the country including California Chrome, whom was shooting for the first Triple Crown win in 36 years. After sweeping the Kentucky Derby and Preakness, California Chrome was the clear favorite over any of the horses, however Tonalist beat the thoroughbred easily, along with Commissioner and Medal Count who took second and third in front of California Chrome.

5. He Didn’t Run in the Kentucky Derby or Preakness

There has been a lot of controversy over Tonalist’s win involving the owners, specifically Steve Coburn, over the fact that Tonalist did not run in the first two races of the Triple Crown. Coburn called Tonalist’s team cowardly for saving him for the last leg instead equally running him in all three. Coburn blamed this and California Chrome’s weariness versus the other horses as to why he fell short in the race. 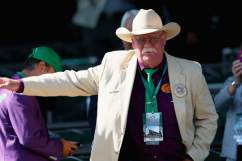 Loading more stories
wpDiscuz
1
0
Would love your thoughts, please comment.x
()
x
| Reply
Tonalist will go down in history as the race horse who stole the bid from California Chrome in the last leg of the Triple Crown in the 146th Belmont Stakes.